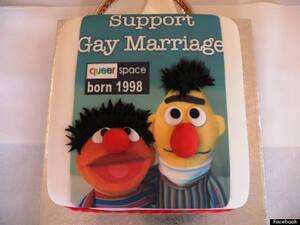 Ashers Bakery in Belfast declined the request for a cake with an image of Sesame Street puppets Bert and Ernie below the motto ‘Support Gay Marriage’ in May, 2015

Five justices unanimously ruled that the McArthur family [who said they were being forced to act against their religious beliefs] did not discriminate against gay rights activist Gareth Lee on the ground of sexual orientation.

“It is deeply humiliating, and an affront to human dignity, to deny someone a service because of that person’s race, gender, disability, sexual orientation, religion or belief. But that is not what happened in this case.

“The bakers could not refuse to supply their goods to Mr Lee because he was a gay man or supported gay marriage, but that is quite different from obliging them to supply a cake iced with a message with which they profoundly disagreed.”

Because religion sort of?

105 thoughts on “The Not So Great Ulster Bake-Off”