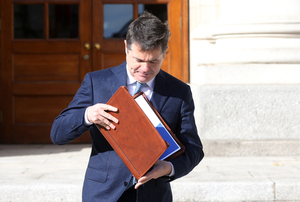 Derek Mooney was right, I know that doesn’t get said about here a lot, but he was right to question the need for the Red Carpet Event around the Annual Budget

But then I suppose RTÉ would be bereft of 50 hours or so of programming across their various platforms and deprived of scooped soundbites direct from Government Ministers.

This Budget was undramatic, unexciting and just too well flagged that it became irritatingly boring; like compulsory Ethics hours for those of us that have to oblige annual CPD requirements.

Similar to last year , I have handpicked some elements to highlight here, but it was impossible stay ignorant on the squeals that it was a budget for Landlords.

Anyone that has followed my view on the rented sector will have heard me insist that we need more Rental Units, and more again, but more specifically we need more rental units from Private Landlords and less from Reit type lettings.

We have an accommodation emergency; the time for calling it a crisis or a shortage has long since passed. Up to now, private sole-trader type landlords were departing the sector like flocks heading South.

Therefore, I’m of the opinion that relieving their tax burden is a good thing, and hopefully it might encourage more Buy-To-Let investors into the sector.

By the same measure, this move might also serve to reassure those in there already, the lads that do not have the benefit of being incorporated and en’Trusted, or party to cheap sale prices and charitable tax rates.

More Units mean more HAP availability, so there’s that too, despite my reservations on that whole scheme, if it keeps families out of hotels then let’s not fix it just yet.

Since I mentioned Reit, it is worth mentioning now that the Exit Tax Regime was addressed with new Foreign Controlled Corporation Rules.

Many easy shots and sneers at this will mention it was reduced from 33% to 12.5%, but what might be missed was that the drop came with a nice sidebar; the exemptions to the Exit tax (which is also due on the transfer of assets and not just when they cease to be tax residents) have been removed; in full.

And as we all well know exemptions in Tax Law have made many a man a millionaire or more. I’ll take 12.5% on everything, rather than 33% of feck all any day of the week.

While I still think the hotel sector are being bailed out unfairly to the rest of us, I also want to reintroduce something from last year’s comments that is still ticking me off, Employers PRSI.

Many of you will say the increase is only by one tenth of a % – a so-what-of-it perhaps; but anything that shoehorns employees into Sub-Contracting arrangements, while keeping the PRSI frameworks as they are for the purposes of current cashflow, is not good long-term strategy, nor is it good value-for-money for the taxpayers that fill those Social Insurance reservoirs.

Budget ’19 did offer something for those who may be qualify for distributions from the Bank of Mum and Dad; they got themselves a ten grand top up to their (Group A) Gift Tax exemption.

This Government had a summer long of opportunity to address what I think is one of the principle failures of our Housing and Accommodation emergency; Long-term Rental in the family Home Sector not being considered as a viable option, or even as an alternative to Social Housing or Owner Occupied.

It is my opinion this is a sector that should be studied and trailed and tested.

This city is falling over with associations and groups representing tenants and renters; yet I have yet to see any organisation come up with an approach to Affordable Rental Housing that makes it a confident long-term option or choice for anyone.

And since the Government hasn’t, then naturally neither has any one else interested in long-term investments.

I suspect we will have another Budget within the next nine months. Like last year’s, this was not an election budget.

My advocacy for a stronger, wider, healthier, and more competitive private Rental sector will continue, and I will keep shouting until someone in Government cops on that Social Housing needs to be Local and needs to go back to the Local Authorities.

Then we can start to Rebuild this Country on behalf of all of us.