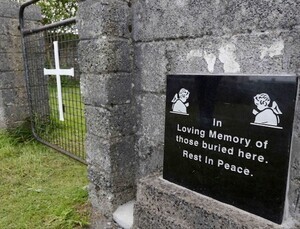 ‘T[uam survivor ‘Peter Mulryan’s daughter Trina attended the meeting with An Taoiseach and his adviser; also Anna Corrigan represented the Tuam Babies Family Group while Catherine Corless was also in attendance. Minister Zappone was not present but her General secretary, Fergal Lynch and an adviser, Patricia Ryan were there.

As I understand it from Trina, each of the three representatives made their case for full excavation – Trina provided our statement while Anna Corrigan also gave a documentary submission and Catherine Corless spoke.

All stated their viewpoints which supported one another – full excavation, exhumation, retrieval of DNA and safe storage facility to enable matching into the future while also appropriately with dignity and respect dealing with the remains of the little children.

An Taoiseach stated that Minister Zappone will bring this to Cabinet today (closed meeting) where the Attorney General will also be in attendance.

As we know the AG has been involved for some time so again, in preparation of the Cabinet meeting it is suggested the AG will put forward a viewpoint. Again closed meeting and unlikely that we will receive further information on it. There is no indication of when a final decision will be made.

The meeting lasted two hours or more – and within that time frame the Taoiseach was questioned at length – very few questions answered but many were asked.

On a positive note towards the end Taoiseach Varadkar reflected the need to respond now – with action, rather than words.’

Decision imminent on whether remains of hundreds of children feared buried at Tuam baby home to be exhumed (Independent.ie)

“I feel it was worthwhile because I suppose it was good to get the Taoiseach to sit down and just listen before the announcement is made today before the minister brings the memo to Cabinet.

“It was chance for us, for a last plea for the Government to do the right thing.

“We did get the message across to him that we do realise that all this can be done for Tuam, right up to DNA testing, if the Government have a will.”

23 thoughts on “‘The Taoiseach Reflected The Need To Respond Now With Action, Rather Than Words’”