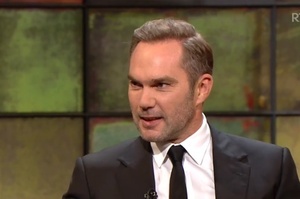 On The Ray Darcy Show…

From the creators of Love/Hate comes new Irish crime drama Taken Down. Ray will be joined by three of the stars, Brian Gleeson, Lynn Rafferty, and Aïssa Maïga who will take us the behind the scenes of one of the most hotly anticipated shows of the year.

Ray talks to by one Ireland’s most loved football heroes and ambassador for mental health, Jason McAteer.

To celebrate 10 years of collaborations, Ray will be joined by Brendan Courtney and Sonya Lennon, as they look back on their time on Off The Rails and how this led to the launch of the hugely popular Lennon Courtney clothing range. Brendan’s mother Nuala will also join Ray to chat about their upcoming RTÉ One documentary, We Need to Talk about Mam.

And Mary Coughlan joins Ray to talk about her most ambitious project yet which sees her team up with Bjork’s producer in a theatre production about her own life story.

The Ray D’Arcy Show on RTÉ One tomorrow at 9.35pm