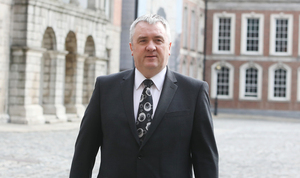 A disgraced garda superintendent heavily criticised by the Disclosures Tribunal for his role in a campaign to smear whistleblower Maurice McCabe has retired from the force.

Former Garda press officer Dave Taylor ceased being a member of An Garda Síochána as of midnight last night after a retirement request was approved by Garda Commissioner Drew Harris.

He will receive a full pension and will not now face a disciplinary investigation over the tribunal’s findings.