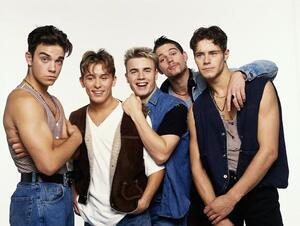 Last week, with a Golden Discs voucher worth twenty five euros on offer, we asked you to reveal  your favourite song from a boyband.

You replied in your tens.

In reverse order then….

‘Despite a deep love of great music, I have a bit of crush for Jump by Kris Kross because it was a seriously cool and super street rap song. Precise and sharp lyrics with an amazing video. We probably wouldn’t have the likes of Eminem today except for these two rapping rapscallions.

I never did get the Eagles baseball jacket that Chris “Mac Daddy” Kelly wore in the video but me and my mate, when we were out of eye shot of me Ma, would take off our jeans and put em back on backwards and strut about as cool as you could be.

The oul lad in the local newsagents barred us from coming in with our jeans backwards, we think he thought it was some sort of shoplifting ploy, what did he know, the old square eh?’

‘Despite a deep love of great music, I have a bit of crush for Deep by East 17 because it’s a soulful, upbeat rap-ballad that takes inspiration from the Trip-hop scene from the early 90s and has no place in a boy-band discography. Regarding the video, urban camouflage will always be cool.’

Janet I Ate My Avatar writes:

‘Despite a deep love of great music, I have a bit of a crush for Double Lovin’ by The Osmonds because when released in ’71 at the height of the free love movement, they solidified their place as the spearhead of the sexual revolution with a song that opens up the possibility of multiple lovers for women in this important time for sexual equality.

Take That – Back For Good

‘Despite a deep love of great music, I have a bit of crush for Back For Good by Take That, because purely in terms of phonetics, the line ‘Got your lipstick mark still on your coffee cup’ is the aural equivalent of crack cocaine, just the sounds made by the words, all those perfectly spaced hard consonants clicking out of the speaker, still gives me shivers…

Last week: Love Them For A Reason

Doobie Do Be Do?

39 thoughts on “Unaware But Underlined”