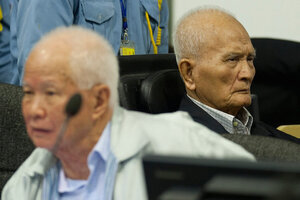 The defendants, Nuon Chea, 92, and Khieu Samphan, 87, are among the last surviving chieftains of the Khmer Rouge, a brutal regime that decimated Cambodia from 1975-1979 in an effort to recreate a utopian agrarian society. An estimated 1.7 million people—or more than 20% of the population—died.

Despite their blood-drenched pasts, neither Nuon Chea, who was described as the “loyal right-hand man” of Khmer Rouge leader Pol Pot, nor Khieu Samphan, who served as head of state, were previously charged with genocide.

Friday’s verdict was the first time in 12 years of meting out justice that the tribunal delivered a genocide verdict—internationally, a rare pronouncement……

19 thoughts on “Khmer Till I Tell You”