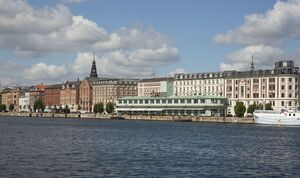 It has been reported that the body of an Irish football fan was recovered at Havnegade, a waterfront area in the centre of the city of Copenhagen, Denmark.

It comes ahead of Ireland playing Denmark in the city of Aarhus tonight.

In a statement, the FAI has said:

The FAI has expressed its condolences to the family of the supporter, who passed away in Copenhagen, ahead of the UEFA Nations League game between Denmark and Ireland.

An official request has been submitted to UEFA, by the FAI, to hold a minute’s silence before kick-off in tonight’s game in Aarhus.

The Ireland players will wear black armbands in respect of the supporter.

The FAI continues to work with An Garda Síochána and the Department of Foreign Affairs and Trade on the matter.

3 thoughts on “In Denmark”