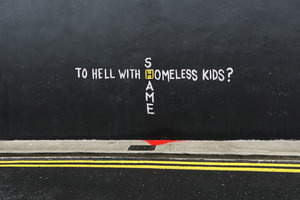 A mural on Frederick Lane, Dublin 1

I was asked to write a piece for the Sunday Business Post’s powerful three-page-special (behind paywall) on homelessness yesterday. 500 words. In fairness to the editor, it was probably the lawyers who advised the cuts, so respect to The Sunday Business Post for running what they did. This is the piece as it was intended, unedited and unapologetic…

Imagine the excitement of thousands of forgotten Irish children, holed-up in emergency accommodation, as minister Simon Coveney swears he will get them out by summer 2017.

Imagine those children, two years later, realising the only thing Coveney’s promise secured was his own political advancement. He was made Tánaiste. The second most powerful man in Government.

Imagine those children today, knowing that their dreams and aspirations were nothing more than cannon fodder for the normalisation of obscenity.

The Cambridge English Dictionary defines Psycopath as: a person who has no feeling for other people. Does not think about the future. Does not feel bad about anything they have done in the past. Very mentally ill. Unstable. And dangerous.

Coveney taught these children that lying leads to success. Lack of empathy benefits progress. Betrayal is good for business. Only certain lives matter. Dreaming is for the few. A childhood is for the chosen. The consequence of naivety is eviction. The price of vulnerability is horror. Santa is too busy hanging with the socioeconomically selected kids to visit your sorry working-class ass.

These children were taught the literal Cambridge Dictionary definition of what it means to encounter a psychopath. They have learned that political leaders don’t give a damn if increasing numbers of children’s lives, along with the lives of their mothers, fathers, brothers and sisters, end in a damp doorway.

When we value humanity and art and science, beyond commerce, as something fundamental to our existence, something vital to our wellbeing, something capable of changing our world, we put those children’s sublime dreams and aspirations into action.

These children know we are braver than we believe. They understand that we will only comprehend courage in retrospect, after we have taken action, on their behalf. They have learned that we don’t have to fear liars. Or traitors. Or psychopaths.

There Goes The Neighbourhood

‘Will They Still Be Your Friend? Or Will They Find You Scum?’

41 thoughts on “The Normalisation of Obscenity”