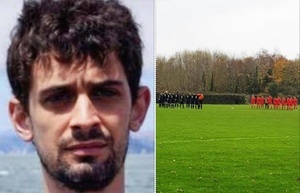 I was home yesterday after my work finished. I was playing some video games. They told me, ‘you’re a celebrity.’

They started sending me all these news articles and mass media. And that’s how I found out I was dead.”

Fernando LaFuente (top) on RTÉ Radio One’s Today with Sean O’Rourke on the faking of his death by his former club Ballybrack FC of the Leinster Senior League.

23 thoughts on “Can You Hear The Drums, Fernando?”