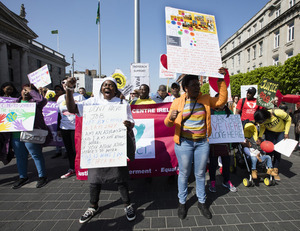 From top: Refugees march during The International May Day festival in Dublin in 2017; Michael Taft

The far Right and their allies may not yet be a significant political force in Ireland but they are proliferating on a number of internet platforms, with the constant threat this could spill out into the mainstream debate.

Working under the cover of extremist hashtags one of their weapons is to distort data to give their claims some credence.

Claims that Ireland has a high level of non-citizens, that we are being inundated with asylum-seekers, that immigrants come here to live off our ‘generous’ social welfare payments dominate the far Right discourse.

One might be tempted to ignore them since to date, they are a tiny force. But, as we have seen with the suspected arson attacks on proposed direct provision centres in Moville and Rooskey, their claims can feed into dangerous results.

So let’s go through their assertions.

Non-Citizens in Ireland and the EU 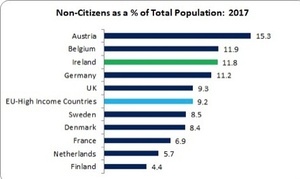 Ireland has a higher proportion of non-citizens than the EU high-income countries average – with nearly one-in-eight Irish residents being citizens of another country. But when we look under the hood, we find something interesting about the composition of Irish non-citizens. 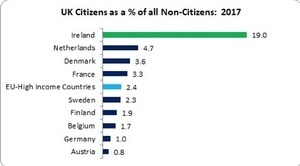 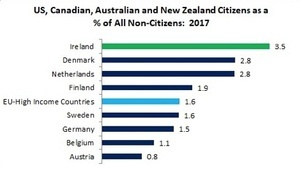 Maybe the Far Right is concerned about all those English, Scots, Welsh and even Northern Irish (Eurostat categorises them as non-citizens) living here. Or similarly with Yanks, Aussies, etc.

I suspect, however, that what agitates the Far Right are all those ‘others’ – Asians, Africans, South Americans and people from the Middle East. 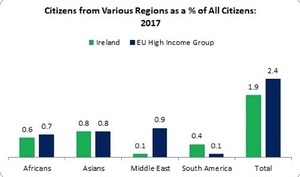 These are small numbers. And when the Irish Far Right gets in their ‘Islamophobia’ mode they are getting worked up over really small numbers. Of course, they might reply the situation is ‘getting worse’. Translation: there are more and more of these folk pouring in here, tsunami-like. 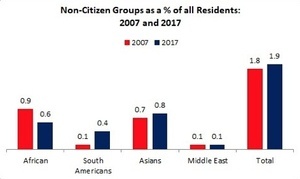 But no, there is almost no growth in the population of these non-citizen groups in Ireland.

Immigrants and the Labour Market

Another feature of the Far Right discourse is that immigrants come here to ‘live off the state’ (like senior creditors of banks, I suppose).

So let’s examine the unemployment rates among non-citizens in the high-income EU countries. The labour market gives us a sense of alleged ‘sponging’. It is also an indicator of integration – work being that social space where people from everywhere come together to contribute to the economy and society. 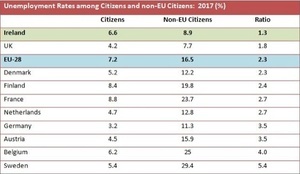 Let’s walk through this table. The unemployment rate here among Irish citizens was 6.6 percent in 2017; among non-EU citizens it was 8.9 percent. This results in a ratio of 1.3. This is the best result among the high-income EU countries.

Other countries are struggling to integrate non EU-citizens into their labour markets. For instance, in Sweden, while unemployment among Swedish citizens was 5 percent, among non-EU citizens it was a staggering 29 percent – a ratio of 5.4. Germany, Austria and Belgium are similarly struggling – though it should be pointed out that over the recent past these countries welcomed a large number of people fleeing wars and deprivation. It will take time to integrate these people into the domestic labour market.

The point here is that the claims that people come here to sponge off the state are ill-founded. We have one of the best records of integrating non-EU citizens into our labour market.

A third trope of the Far Right is that we are being overrun with asylum-seekers or, as some would have it, ‘bogus’ asylum-seekers.

Again, the data doesn’t bear this out. 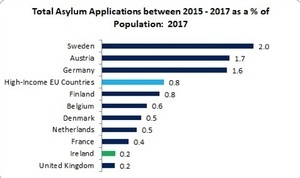 Along with the UK (which puts their Brexit/immigration debate into some context), Ireland had the lowest level of asylum applications in the period between 2015 and 2017 – the years of the European migrant crisis.

Over the three-year period there were 8,400 asylum applications in Ireland. If the applications were at the high-income EU average, this would have meant 39,000 (if at the level of table-topper Sweden, it would have been 96,000).

And lest some would argue that we have a lax regime, that anyone who applies for asylum is granted it, the fact is that Ireland is rather tough. 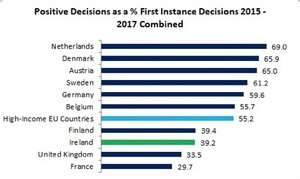 Only 39 percent of asylum applications are met with a positive decision here. The average for high-income countries is 55 percent.

Ireland has a relatively high level of non-citizens in its population. But this is down to the high level of UK citizens and citizens from other English-speaking countries (US, Canada, Australia and New Zealand).

Ireland has significantly fewer non-citizens from outside the English-speaking world than high-income EU countries.

The proportion of non-citizens has remained stable over the last 10 years (i.e. there is no ‘surge’).

Non-citizens in Ireland are more integrated into the labour market than any other high-income EU country – that is, there is lower unemployment among non-citizens. So much for the ‘sponging-off-the-state’ argument.

We have had far fewer asylum-seekers and we grant asylum to far fewer than most other high-income EU countries.

The claims of the Far Right and their allies collapse when we look to reality.

There are many who get taken in by the Far Right and not because they are racist or anti-immigrant. Many are confused, hurting, looking for answers. Progressives must engage with this constituency with empathy, pointing out the reality and providing a better alternative for them, their families and their communities.

As to the Far Right and their allies, I am loathe to use the label ‘racist’. However, their manipulation of information can legitimately lead one to conclude that many, if not most, are either conviction-racists or instrumental-racists (i.e. they are not racist themselves but use racist arguments in pursuit of their agenda). I’m not sure there is any objective difference.

But progressives should not be content to point out the failings of the other side. Throughout Europe, the issue of immigration has divided the Left. Its complexity – culturally, economically – means there are no simple answers.

It is imperative we create a space to hear a range of progressive viewpoints. We don’t have to agree – indeed, we can disagree robustly – with different propositions and analysis. However, to curtain-off the debate over migration-management leaves us with fewer tools to construct an alternative.

The Far Right – through its extremism and manipulation of facts – is trying to poison the immigration debate in order to polarise positions. In reality, the Far Right doesn’t want an informed debate on immigration. They want a shouting match.

They hope, in this atmosphere, to make gains. We shouldn’t allow them that oxygen. We should challenge them at every turn.

And engage in an inclusive dialogue throughout society that can win people over to a positive message – about the economic, social and cultural benefits of immigration and the immigrants themselves. 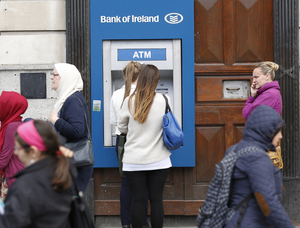 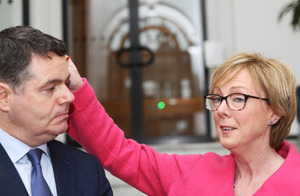