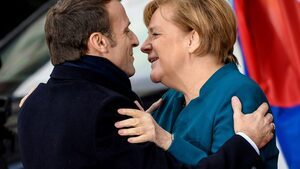 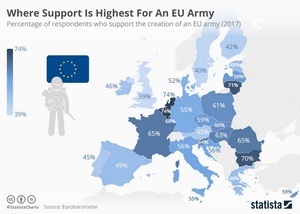 From top: Angela Merkel and Emmanuel Macron arive for the signing of a new Franco-German ‘friendship treaty’ in Aachen, Germany yesterday; a Eurobarometer poll from 2017

Given that many feel the agreement in Aachen is a step towards an EU army, do countries actually support such a concept?

The most recent Eurobarometer poll on the subject was conducted in 2017 with 74 percent of respondents in the Netherlands and Belgium supporting an EU army. In France and Germany, the share of in favor stood at 65 and 55 percent respectively.

After Historic Franco-German Treaty, How High Is Support For An EU Army? (Niall McCarthy, Forbes)

Where Support Is Highest For An EU Army (Niall McCarthy, Statista)

So 46% of Irish people support an EU army?