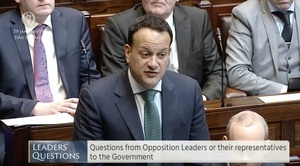 Taoiseach Leo Varadkar in the Dáil this afternoon

Taoiseach Leo Varadkar spoke about the series of 24-hour nurses’ strikes which are set to begin tomorrow and take place over the next few weeks.

He said the Cabinet spoke about the matter this morning.

He said efforts are still ongoing in the Labour Court to resolve the matter.

“I should say regrettably, in terms of patients and patient care, the damage is already done. Over 1,000 operations cancelled, thousands of outpatient appointments cancelled as well.

“Even if the strike is called off last minute, it will not be possible to reschedule those appointments for tomorrow. So in terms of patient care, unfortunately the harm is already done.

Mr Varadkar also said that while the country ended up with a “small budget surplus” last year and this is hoped for again this year.

But, he said, if there’s a no-deal hard Brexit, “it wouldn’t be fair to taxpayers to borrow money to fund pay increases”.

He said to borrow money to fund pay increases would only lead to “pay-cuts down the line”. 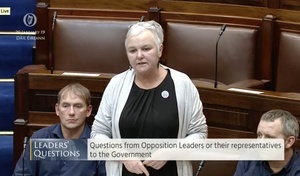 People Before Profit-Solidairty TD Bríd Smith put to Mr Varadkar that he’s earning six times as much as a nurse.

She asked if he was worth six nurses. She then said:

“I think six nurses are worth a hell of a lot more myself. But we cannot contain that situation forever. Pay has to be put at the heart of it and Joe Public knows that that’s the reason.”

He said she stands up in the Dáil every week and supports every cause.

“That’s why your support is meaningless, because you support every cause.”

Earlier: Calling Out Around The World

67 thoughts on “‘The Damage Is Already Done’”