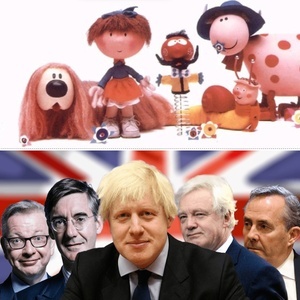 It makes more sense to me now. It was an allegory written before the events it so perfectly describes. Growing up watching it I thought it surreal, but now realise it was created as prognostication at is finest.

On the learning the history of what was meant to me a children’s television programme, it seems that the story of the making of the programme was as illustrative as its contents were.

The premise was a set of characters who lived on or around a fairground roundabout, a Magic Roundabout, a perfect allegory for people or things that never went anywhere.

The characters themselves also represented allegorical material capable of describing qualities we see now in abundance – the distance from reality; the slowness of response; the denial of the possible; the comfort of considering themselves separate and apart.

The main character was a long haired dog. His friend a jack out of the box, who moved across the screen propelled by a spring. Other characters included a snail, a cow and a rabbit. The only character which seemed to missing was that of a unicorn.

The programme was quite popular in its own right. In its later years it acquired a considerable adult following, even if many of these watched under a chemically induced euphoria.

It might even be suggested that the programme was to the forefront in preparing a society and its politics, for its eventual infantilisation.

It had all begun in a spirit of entente. Developed in France, where it was broadcast as Le Manège enchanté, one of the its principal animators was English. The BBC expressed an interest in the programme but was unwilling to use subtitles or to dub the French script into English.

What they eventually decided to do, in a typical display of British (English) diffidence, was to use the French films which were then narrated with completely different story lines.

Characters names were also changed. The dog character who in French was called Pollux (and he was a bit of a one) became Dougal in English.

The name change almost caused a diplomatic incident as the French thought it a subtle satirical dig at their President, General De Gaulle. The man, who at that time, was continuing and adamantly saying ‘Non’ to the idea of the United Kingdom becoming a member of what was then called the European Community.

The inability to use the same terms, the same script, or even the same language, saw the British refer to the European Community as the Common Market, which according to tone and emphasis could be loaded with meaning.

I shouldn’t have to join the dots here and state how this relates to where we are now. The Magic Roundabout is Brexit before its time. Brexit is just as surreal, just as mind-bendingly awful.

A melange of characters who just don’t get it, who sadly don’t want to get it. A perverse collection of ideologues who want to impose their deranged narratives in interpreting the same basic material.

Perhaps the best logic that can be applied to this whole sorry mess, is to dwell upon the words of the jack out of the box character, Zebedee, who would end every episode of the British series with the immortal phrase, “It’s time for bed,”.