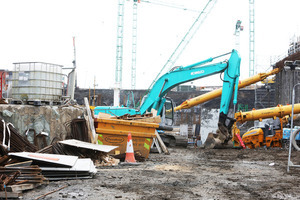 Construction work on the National Children’s Hospital earlier this month

The final cost of the new national children’s hospital could exceed €2 billion, the Public Accounts Committee has heard.

Labour’s health spokesperson Alan Kelly said it is “mind boggling” that up to September last year, the cost of the project was expected to be €983m and four months later it cannot be guaranteed that it will come in under €2bn.

The overall cost of the project has now risen to a total of €1.733bn.

‘A Harvey Smith To The Committee’ [Updated}

Read It And Weep

30 thoughts on “Pick A Number”