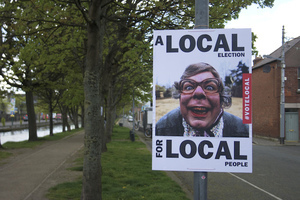 Along the Grand Canal, Dublin 2 during the 2014 Local & European Election

Unlike all other candidates,
I’m very much in favour of dog shit;
have it with everything;
am especially fond of the sort produced by
frightened Rottweilers.
I have the energy, enthusiasm and necessary
sexual appetite to properly
service the people behind doors
I’m knocking on locally.
I’m for more traffic jams
and overweight policemen called
Frank.
I won’t be diverted into talking
about abortion or world war four.
This is a little election for little people.
I’m against nasal congestion
and political reform; have lived locally
for the past half hour.

Our eight year old, Cian,
will support whatever football team
you want him to. I’m against
adverse weather conditions in Salthill;
okay, in theory, with the continued
existence of black people.
I’ve studied transport systems
at Mauthausen, Belzec, Vorkuta; think I know
how to ensure two Ballybane buses
never again come along at once.