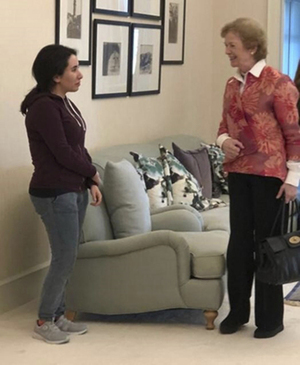 Via The New York Times:

On Christmas Eve, Dubai released the first public photos of Sheikha Latifa since her disappearance. They showed her sitting with Mary Robinson, the former president of Ireland and former United Nations High Commissioner for Human Rights, who confirmed that she had met the sheikha at her family’s request.

Ms. Robinson said Sheikha Latifa was safe with her family, but said she was receiving psychiatric care, calling her a “troubled young woman” with a “serious medical condition.”

“This is a family matter now,” Ms. Robinson said.

The sheikha’s advocates were taken aback that a respected human rights crusader had seemingly embraced Dubai’s official line. They disputed that she had a psychiatric condition, apart from any she might have developed because of imprisonment or drugging.

“I know 100 percent for sure that she doesn’t need mental care,” Ms. Martinengo said. “Maybe now, after all these treatments, but not before. How can you think that a person who’s been in prison for nine months wouldn’t seem troubled?”

With negative attention thickening around her, Ms. Robinson issued a statement saying that she had made her assessment “in good faith and to the best of my ability,” adding that the sheikha’s “vulnerability was apparent.”

By mid-January, a lawyer who had been working with activists left the sheikha’s case without explanation. Several friends still in Dubai said they were too frightened to speak, while Mr. Jaubert abruptly stopped responding to requests to be interviewed for this article.

Sheikha Latifa had little doubt about what would happen to her.

“If you are watching this video, it’s not such a good thing,” she said in her video. “Either I’m dead, or I’m in a very, very, very bad situation.”

Change Nation? I Can’t Even Change My Phone

And So It Came To Pass

Don’t Mess With Their Tutu