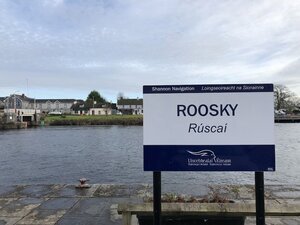 Roosky on the River Shannon

The designated home of a new Direct Provision centre – target of two suspected arson attacks – and scene last Sunday of an anti-racism rally where, amid some confusion, villagers, who objected to the impression that locals were being branded racist, clashed with organisers.

‘Niamk Kiernan and the rest of the Rooskey locals who are overwhelmingly in agreement with her (I’m from here) are not saying that the hotel should not be offered up to asylum seekers.

The fact is that these people are being dumped in this hotel in the middle of nowhere with no access to any amenities or chance of employment/social enrichment.

There’s a lot of important context for why Rooskey and its people are so upset by this asylum centre and the “it all boils down to racism or xenophobia in some way” stance a lot of people find themselves taking.

A stance which is understandable when you see just how much emphasis is being placed on the racism agenda to the point of neglecting the actual and reasonable concerns we’ve been trying to raise.

Here’s some of the reasons there’s so much opposition for this centre:

– There hasn’t been a bus service in the area for going on a decade now. Getting from the village to neighbouring towns and culture/entertainment is both a necessity (there’s *nothing* in Rooskey) and a serious struggle.

The isolation is a pretty big contributing factor for the high suicide rates Roscommon, Leitrim and Longford have experienced in the past years (fyi Leitrim has the 3rd highest rates in Ireland currently – behind Cork and Monaghan).

– The GP clinic only opens for a few hours a week for prior appointments only. This is a service that for as far back as I can remember was struggling to cope with servicing the area; you could be in the waiting room for up to three hours back when it was first come first served.

The appointments-only schedule means that the GPS don’t lose their sanity, but it certainly means that many people – the elderly in particular – simply delay seeking medical help and suffer in silence, or have to arrange transport to the next closest GPs in Mohill or Longford.

The main point is that it is an already overloaded system that definitely would collapse with such a large influx of new residents.

– The Garda Station is open for a grand total of 2-3 hours per day. You have to hope that in the event of an assault, burglary or domestic violence incident, the perpetrator(s) have the decency to carry out their business during these working hours – the chances of anyone actually turning up to investigate calls for help are almost hilariously low even when someone’s in office.

– The nearest hospital’s A&E unit was shut down in 2011 which means that for the all too frequent emergencies residents encounter – when the young people have had to move away to find jobs and the population is aging its a regular occurrence – unless an ambulance was passing the area en route to Sligo or Portiuncula at just the right time you’re looking at a bare minimum of 45 mins for help to arrive, before facing a 2 hr drive to receive critical treatment.

And that’s if the medic drives like the clappers the whole way. God forbid you have to avoid traffic or the perpetual and ineffectual roadworks – the Golden Hour crucial for preserving life is a dot in the rearview mirror by the time you roll up to the hospital entrance.

– The village is an empty shell. A large portion of main street is vacant buildings, or in many cases the dilapidated ruins of them. There’s four pubs, a post office, a community centre (unsure how much use it gets these days but I know people are trying to keep it entertaining), one shop, two takeaways, a primary school, nursing home and a church.

There’s nothing recreational for people to do in the village if they aren’t inclined to be drinking, the broadband is about as reliable as warm, sunny weather in Ireland, and if you don’t have a licence and car of your own you’re for all intents and purposes stranded in the middle of nowhere.

– As noted earlier, there are no job prospects at all around here. To be earning money you’re either going to be a farmer or you’ve got to move to where the work is. The loss of the two local factories (VistaMed relocated this decade and Hanley’s went up in flames back in 2002) in addition to the closing of the Shannon Key West Hotel in 2011 means that the primary – heck, the sole – attraction we have at this point is attracting tourism from the passing boats and descendants of emigrants returning to find their roots.

You can imagine how helpful the lack of accessible public transport is on that front – and visitors having no options other than the four pubs for entertainment doesn’t make for a great family trip (the wojus internet service is the icing on that boredom cake).

This has meant that moving to Dublin/Galway/Cork  or even migration is what the majority of the younger generation here are resorting to – we all know trying to maintain a y balance life is a struggle in Ireland with the jump in renting costs and drop in available accommodation.

There’s absolutely nothing for us here.

Why would anyone think it a good idea to effectively dump asylum seekers who’ve already been through a lifetime of trauma and hardship into a ghost town to rot under the guise of care and housing?’

Monday:  You’re Not From Around Here, Are You?

‘There Are Six To Eight Beds In Some Rooms’

84 thoughts on “Welcome To Roosky”