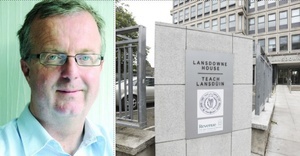 Commentators are increasingly turning to the subject of public sector pay – in large part, to warn against pay increases or increased employment. In some cases history is being re-written.

Let’s go through some of the arguments – focusing on a recent article by Irish Times’ columnist and managing editor Cliff Taylor.

Not that he got everything wrong – he is a serious commentator. And what we need is a serious and evidence-based debate. Note: Quotes in bold below come from Cliff Taylor’s article.

True, but it doesn’t get us very far.

Public employee compensation (which includes pensions and social insurance) may have returned to 2008 levels, but the economy has moved on. 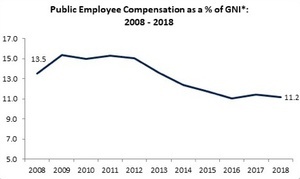 ‘Remember, the build up in public spending in the 2000-2008 period, based on a shaky tax base, left the exchequer finances exposed and filling the resulting gap contributed to a massive jump in the national debt during the crisis. The result: this year the Irish taxpayer will pay €5.3 billion in interest on the State’s debt.’

Let’s not avoid the historical elephant in the room. 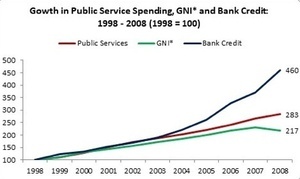 When the crash came jobs melted away. Between 2007 (when construction employment started falling as property prices topped out) and 2010, 150,000 building employees lost their jobs – half of the fall in total employment.

This was further compounded by Fianna Fail’s fiscal policy that tied tax revenue to property-related tax receipts while cutting every possible tax (corporation, inheritance and capital gains, income, stamp duties, etc.) resulting in what Cliff Taylor rightly refers to as a ‘shaky tax base’. In a mere two-year period – 2007 – 2009 – revenue collapsed by €15 billion or 21 percent.

It is hard to attribute reckless bank balance-sheets, property speculation, the collapse in tax revenue and the destruction of property-related jobs to the growth in public spending, public services or the public sector payroll.

And interest rates? There is the little matter of the bank bail-outs. Between 2008 and 2011, the state was hit with a €42 billion bank debt bill, primarily due to Anglo Irish and Irish Nationwide (the bailouts of the systemic banks – Bank of Ireland and AIB – were categorised as ‘investments’ and were paid out of the National Pension Reserve Fund).

This, too, could hardly be laid at the door of the public sector pay bill.

Public, household and corporate finances became seriously unbalanced in the pre-crash period as people, companies and the government chased an over-heating economy.

Any analysis of the pre-crash period that doesn’t start with the speculative-based fiscal policies and bank balance sheets is likely to miss the point by a wide margin.

‘Public sector numbers – and particularly pay – ballooned in the run-up to the crisis . . .’

This, again, is true and, again, misses a larger point. In the decade up to 2008 the public sector pay bill (both pay and employment) grew by an average 16.2 percent annually. All wages in the economy grew by 14.9 percent.

When we drill down further into average compensation per employee, we find that between 1998 and 2008 there was an annual average increase of 8.2 percent in the public sector compared to 7.3 percent in the total economy – or less than 1 percent annually. This could hardly be considered extravagant.

But how much of this was due to a compositional effect? We can drill down even further courtesy of the CSO. 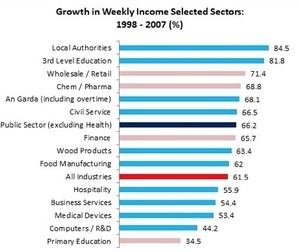 If we had the health sector data it would have depressed the public sector average given that in 2008, health sector weekly income was 7.5 percent below average.

To restate: there was a lot of ballooning but the toxic air came from a speculative-driven economy and a fiscal policy tied to property interests. The comparisons between the public and private sector show similar patterns.

‘Average public sector salaries here are 40 per cent ahead of the private sector. However, public servants are generally older and better educated, factors that have been used to justify higher pay levels. A CSO study which tried to adjust for this element suggests that at lower to medium levels, public pay is ahead of the private sector, though the position may be reversed at higher levels.’

The CSO did more than that. It showed that public and private sector employees earned the same on a like-for-like basis (though prior to the crash there was a public sector premium). 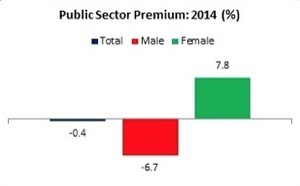 ‘International comparisons are more complex and vary from sector to sector. In general the percentage of public resources going to pay here is generally at or above the EU norm, though the numbers employed in the public sector here are lower than in many other EU countries.’

True, it is complex – made even more so by the lack of an internationally-agreed definition of ‘public sector’ employee. For instance, employee compensation in the health sector is not comparable across EU countries.

Many countries deliver their public health services through ‘non-governmental corporations’ such as social insurance-based occupational funds, or purchase them in the market. These are public in every sense of the word, but health employees are not categorised as ‘public’.

For instance, employee compensation makes up only four to six percent of the total health budget in countries such Germany, Belgium and the Netherlands, compared to tax-financed systems where employee compensation makes up over 40 percent of the health budget (UK, Sweden, Ireland). Other countries have hybrid systems. Comparing pay in the public health sector is not possible. 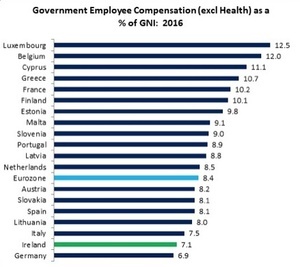 Ireland, based on GNI*, comes in at the bottom of the Eurozone, bar Germany. If we were to reach the Eurozone average we could employ over 40,000 additional public sector workers.

None of this is to say that everything is fine in the public or private sector. And this is certainly not a full picture. There are important issues of fiscal management and productivity that we need to get right.

And who is best placed to lead sound management and improved efficiency?

Ellen Rosen was writing about the public sector but her focus on worker empowerment is just as applicable to the private sector.

‘It is the [public sector] workers who discover that things are not working as it was assumed they would, who first encounter the unexpected difficulties, and who are the first to hear from the clients about needs that the program is not meeting. In short, workers know the operations most intimately and are in the most immediate contact with the clientele.
Workers are not only the natural source of feedback on how things are going, but also the natural source of ideas and insights into the specifics of operations.’

We can have a shouting match over public sector pay and efficiencies (Cliff Taylor never descends to that) with duelling stats and anecdotal evidence that can border on the hysterical – remember the Ministerial claim of a ‘civil war’ between public and private sector workers?

Or we can have a more productive and effective exploration of the issues involved.

It shouldn’t be too difficult a choice.