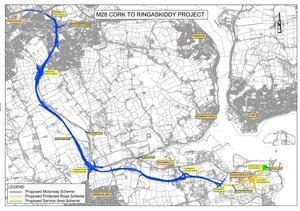 From top: The proposed M28 route from Cork City to Ringaskiddy; Dan Boyle

This week arguments are being heard in the High Court on the decision of Bord Pleanala to agree with an earlier decision of Cork County Council, to approve the route for the construction of a new section of motorway, the M28, to better link the Port of Cork at Ringaskiddy with the existing road network.

The gist of the argument being made is that neither Cork County Council nor Bord Pleanala put sufficient emphasis on the EU Habitats Directive when making their respective decisions.

Their collective oversight seems to have been most negligent regarding a historic quarry at Raffeen, a key point of the proposed motorway route.

Maybe the County Council and Bord Pleanala were unduly influenced by the term ‘quarry’? The site had been untouched for many decades. It has developed into quite a haven of biodiversity.

Something that should been obvious to anyone promoting this project, if they had done anything like an effective Environmental Impact Statement.

There is a good reason that this legal argument could hold sway, given a recent court decision made in favour of Friends of the Irish Environment in relation to the proposed Shannon LNG refinery.

Here the total inadequacy of adhering to the EU Habitats Directive was cited as the ultimate reason why the planning decision was unsafe.

The M28 judicial review is one of several such reviews that have or are being heard, all emanating from the Cork region.

Before the end of 2018 the Save Cork City campaign, protesting OPW proposals to create a concrete sarcophagus for the River Lee, as the least imaginative response to flooding risks, won its judicial review on Cork City Council’s contemptuous ignoring of the Habitats Directive.

Pending judicial reviews remain to be heard on the proposed Ringaskiddy incinerator, the plastics factory being suggested for Skibbereen, and an unloved promotion of a mechanised Kelp farm for Bantry Bay.

Giving permission to hear judicial reviews is by no means a given. The granting of these hearings is an admission that credibility exists in the taking of these cases, combined with the need to have arguments heard.

Part of me welcomes judicial activism in relation to the environment. It highlights the political indifference that has otherwise been the lot of environmental campaigners.

Much of this has been made possible by the application of the Aarhus Directive on the right to freedom of information on environmental matters into Irish law.

The Irish legal system has yet to realise the potential of this directive, but its impact is being felt incrementally.

What these collective actions surely show is that our quasi judicial bodies, Bord Pleanala and the Environmental Protection Agency are not fit for purpose.

Neither body has ever had an environmental activist as a member of its board. Both have been the creatures of the traditional political parties and most particularly of IBEC.

In case it gets mentioned, while The Greens were in government, no vacancy occurred in either of these bodies.

To persist with a system where the only winners are the legal eagles, does not help campaigners, nor does not suit any concept of natural justice, and most certainly it doesn’t suit the environment.

17 thoughts on “Dan Boyle: See You In Court”