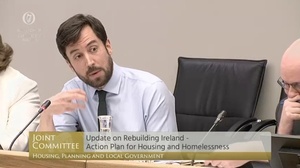 This morning and afternoon.

His appearance follows a report on RTÉ’s Morning Ireland yesterday in which journalist Louise Byrne reported that, according to documents she obtained under Freedom Of Information, the Department of Housing – in a briefing note dated January 31, 2019, to its press office – said further approvals under the Rebuilding Ireland Home Loan Scheme are not currently being issued for these particular loans.

Specifically, the memo said the department “has been advised that no further approvals should issue for now”.

These loans allow first-time buyers to borrow up to 90 per cent of a property’s value from their local authority. The conditions to secure one of these loans includes that the borrower has to show they’ve been turned down for mortgage approval by two banks, while gross earnings cannot exceed €50,000 for a single person or €75,000 for a couple.

Yesterday, in response to questions from Fianna Fáil leader Mícheál Martin about this memo and – specifically Mr Martin claiming Mr Murphy didn’t tell the Dáil that no further approvals were to be issued, Taoiseach Leo Varadkar said the Government needs to decide whether to increase the scheme’s initial cap of €200m, and it needs to consult with the Central Bank.

Mr Murphy told the committee this morning that the scheme is not closed, money for the scheme has not run out and people can still apply for these loans.

He also told committee member Fianna Fáil TD Darragh O’Brien, who claimed to be possession of a copy of the memo obtained by RTÉ, is not his memo.

Earlier, Mr O’Brien asked Mr Murphy not to take the public for fools and said there are 100s of people who are concerned about the loan applications under the scheme.

“Any confusion here has been caused by people asking questions that they either know the answers to or want to cause confusion.”

“I’m genuinely surprised about how this was reported yesterday. The scheme is not closed, funding has not run out and I’ve been very clear about how it’s progressing.”

While I Have You