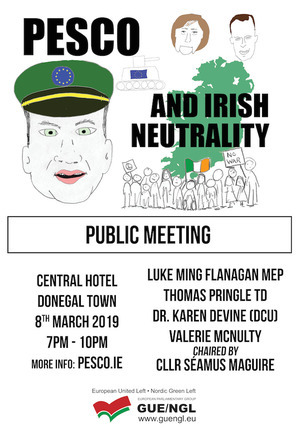 A public meeting about  PESCO (Permanent European Structured Cooperation), an EU defence’ agency, and its implications for Irish neutrality.

At the Central Hotel, Donegal Town, County Donegal at 7pm.

“There is an urgency to talk about the ramping up of military projects in the European Union. Ireland as a neutral country should not be aligning ourselves with imperial powers in Europe. I look forward to exploring this and other implications in Donegal this Friday”.

3 thoughts on “Get Off The Fence”