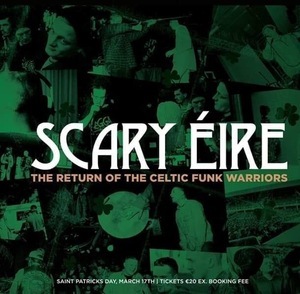 Four years before a 16-year-old-Leo Varadkar was apparently listening to The Prodigy, four “unknown messers and misfits” defined and defied Ireland’s ‘jilted generation’.

Scary Éire never shied from controversy. They knew their surroundings and used the art of hip hop, mixed in with pure Irish grit and wit to rant rap and rave about it. They were a true breath of fresh Éire.

As the main songwriter at just 16 years old RíRá was penning lyrics that hit to the very core of the Irish establishment.

‘Thief and The Liar’ calls out the corruption in Irish politics. ‘Ten Victories’ highlights the sacrifice of the hunger strikers in Northern Ireland in 1981.

‘Dole Q’ hit home (with great tongue and cheek) the rampant unemployment in early 90’s Ireland, while ‘Yeah’ brought home the logic of legalising the herb.

‘Truncheon Song’ dealt with police brutality and another song ‘40 Shades Of Greed’ released on maddaxxe label challenged the teachings of the Catholic Church.

His debut release ‘Horses Work For Donkeys Wages’ has been a massive underground sensation since its release 10 years ago. ’25 O’Clock In The Mornin’ is recognised as the ultimate house party anthem from Toronto to Tokoyo, while stopping off in Tullamore for a cheeky one.

DJ Mek ‘Master of Decks’ has being cutting, mixing and producing non stop and in the midst of madness himself and RíRá were able to put creative differences aside to release without absolutely zero fanfair the most prophetic work that half of Scary Éire have produced in recent times.

Little is known of the other two little rascals though. Dada Sloosh the sound and percussion maestro and Mr Brown the loud and proud energy bomb.

A band of brothers always known for letting their music do the talking will once again bring the craic and mayhem (like the legendary Barnstormer gigs, old school) on the most quintessential Irish stage anywhere in the world celebrating Paddy’s Day.

A space and place free from paddywhackery, and full on celtic clarity awaits anyone who has their emerald ticket.