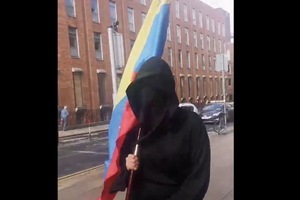 A small protest is taking place outside Leinster House to highlight the number of people killed by US invasions, complete with grim reaper and coffins with the flags of affected nations. The protest is occurring at the same time as @campaignforleo meets @realDonaldTrump #iestaff pic.twitter.com/bH3CnWLqBo

The Senate on Wednesday again rebuked President Trump for his continued defense of Saudi Arabia after the killing of the dissident journalist Jamal Khashoggi, voting for a second time to end American military assistance for the kingdom’s war in Yemen and to curtail presidential war powers.

The 54-to-46 vote, condemning a nearly four-year conflict in Yemen that has killed thousands of civilians and inflicted a devastating famine, sets the foundation for what could become Mr Trump’s first presidential veto, with the House expected to overwhelmingly pass the measure, possibly this month.

4 thoughts on “Meanwhile, Outside The Dáil”