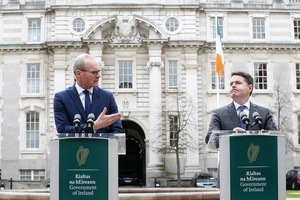 It was only a matter of time. Finance Minister Paschal Donohoe brought a new report to Cabinet last week containing estimates of the damage a no-deal Brexit could do to the Irish economy.

These new estimates paint an even more pessimistic picture than previous reports. The upshot, according to last week’s Sunday Business Post (paywall):

‘The results of the report will feed into Donohoe’s growth forecasts for the annual stability programme update next month, which could reduce the spending available for the next budget.’

‘Could’ is one of those softening-up words. The Government will have the advantage that any reduction in public spending that appears in the Stability Programme Update will be buried in rows of numbers in the annex. By the time analysts unearth the trends, the 24/7 news cycle will have moved on.

Even if a no-deal Brexit is avoided, anything that leads Britain out of the customs union and the single market will have a negative impact on the Irish economy.

The concern is that any reduction in public spending will be on top of current Government projections that already show depressed public expenditure growth. For instance, the projections from the last budget show the following increases up to 2023:

These categories – which make up approximately 90 percent of total spending – are all in the positive zone though still tight, especially the marginal increase in public services.

However, by 2023 there will be more people and higher prices. When we factor these in, the situation changes dramatically. And not for the better. 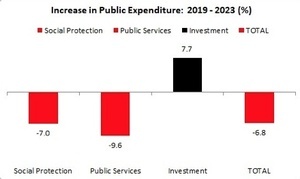 When inflation and population growth are factored in, we see that the major categories in public spending are all being cut, with the exception of public investment. Total primary spending will fall by nearly 7 percent in real terms per capita.

Social protection is being cut. Pensions make up nearly 40 percent of all social protection expenditure and this proportion will rise over the years. Ireland has the fastest growing elderly demographic in the EU.

This will have to be catered for, so what about the rest of the programmes? Falling unemployment won’t help because according to Government projections, it has nearly bottomed out.

Public services will really be hit. With costs rising (again, the additional costs owing to a rising elderly demographic), what services will be squeezed? Implementing Slaintecare will require upfront investment. And we lag behind our EU peer group in education spending.

One can argue for greater efficiencies – but what efficiencies can drive quality while recouping nearly one-in-ten Euros in productivity gains? We’re just as likely to be doing less with less.

There are a couple of important caveats. First, the Government has allowed itself an unallocated sum of €3.6 billion in 2023. This will give some manoeuvrability. However, the inclusion of this still means total primary spending will fall in real per capita terms (approximately three percent).

Second, the Government might have some leeway over the surplus it intends to run by 2023: 1.4 percent. This surplus exceeds what the Fiscal Rules require. However, will the fiscal hawks relent, even in a downturn?

We are experiencing the legacy of austerity – the embedding of austerity into our fiscal foundations. This doesn’t mean actual cuts; it means ‘below-the-radar’ cuts – in real terms lagging population growth.

The failure to estimate the amount of pent-up demand on spending stored up during the recession, combined with increasing demand from a growing population, could help explain the Irish Fiscal Advisory Council’s observation that

Progressives will have to work hard to gain traction in this debate, to come up with a credible alternative to creeping deflation. We can’t rely on some pot of Euros at the end of the tax rainbow (though additional taxation on unproductive capital and passive income wouldn’t go amiss).

Instead, we need to think outside the fiscal box to help put our fiscal house in order.
A good starting point would be to promote the wages of low and average income earners through a radical extension of collective bargaining.

This would generate greater tax revenue for the state and more activity for domestic businesses (more sales), while reducing subsidies to low-wage employers.

And if we combined that with greater worker involvement in workplace decisions which boosts productivity at the firm and economy-wide level (higher output for relatively lower input), we could further increase the gains from collective bargaining.

Taxation and expenditure are not the only ways to address fiscal problems, though of course they play a vital role. The issue is ultimately an economic one. And the productive economy starts with the producers of goods and services; that is, the workers.

This won’t fully protect us from a no-deal or poor-deal Brexit but it will certainly help.

7 thoughts on “Michael Taft: It Begins”