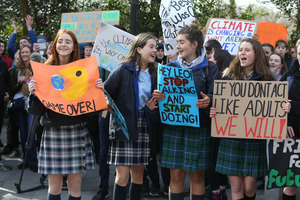 As I turned into Emmet Place it wasn’t as I expected it to be. The scale of the number of students there had surprised me. I ruefully thought of protests I had attended in the past, where a few dozen of us would march to highlight some political or environmental wrong.

Outside the Crawford Gallery I met an old friend. Over thirty years we had campaigned together on various causes. We played different roles. I chose the route of public meetings/gatherings, then trying to articulate wrongs through various media. He chose to be more anonymous. Doing research, producing reports, using science, law and logic to far better articulate what was wrong and why.

He was as pleased as I was at the strength of the gathering. He wondered out loud if we had failed over the previous generations.

Here I partly diverged from his thesis. We had failed to make progress, failed to reverse the damage, but we did to some extent stem the poisonous flow. A generational finger in the dyke exercise.

Years of seemingly futile flag waving exercises at least seemed to have kept the narrative alive. The indignity of being so long ignored, so long derided, before acceptance of the reality of environmental crisis has become mainstream.

The sight of so many young people embracing the challenge that preceding generations had failed, has warmed the cockles of an ageing man’s heart.

And they are doing so with an emotional maturity that I have yet to manage. They are earnest but without the air of preachy seriousness in which many of us had indulged. Indulgences that discouraged many climate change waverers from becoming convinced.

This generation is more inclined to use derision as a better method of displaying two fingers towards the ignorant and the inept.

It has been dawning on them that the ultimate responsibility for clearing up this mess lies with them. They are eschewing the ostrich head in the sand approach of their predecessors. They are recognising that life as we’ve known it isn’t worth living, unless we right these wrongs.

It wasn’t only the emotional maturity and environmental nous that impressed me. These young people are coming through life with none of the stereotypical hangups that blighted my generation.

How they related to each other was a source of wonderment to me. Most exuded a this is who I am, this is what I am attitude, deal with it defiance, that I wish I had during my adolescence.

I did not witness a docile and brain dead generation laid waste by video games and the internet. I saw young people able to interact with each other in an almost gender free way. The emotionally hamstrung me of thirty years ago cried out why couldn’t I be like that?

They will learn their own lessons. They will make as many mistakes as we have made, but they will be starting from a better place.

They will be deeper in the mire, though no longer indifferent to the challenges they face. They will fight in a way we didn’t, nor probably couldn’t.

Our generation may have removed some barriers, cleared some ignorance, but theirs remains the harder task.

Theirs is the shorter time span caused by our frittering of the time of knowing what was known.

I had bought into the myth of of a millennial generation that was spoilt, indulged and cosseted from the real world. Seeing what I’ve seen this week I realise how wrong and unfair that portrayal is.

A future is possible. It will be thanks to them.

Dan Boyle is a former Green Party TD and Senator. He is running in the local elections in Cork in May  for the Green Party.  His column appears here every Thursday. Follow Dan on Twitter: @sendboyle