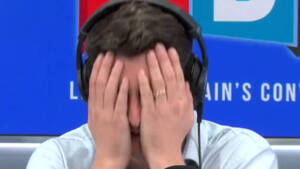 A Remain-backing caller stunned LBC listeners when he said the answer to the Irish border question was to invade the Republic of Ireland.

Steve was repeatedly branded “stupid” for his suggestion by fellow caller Peter who was on the line at the same time.

“We could invade [Ireland],” Steve said during his call to [presenter] Tom Swarbrick (above).

They Think It’s All Clover