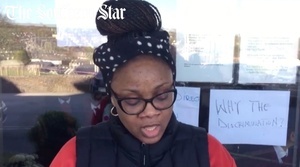 Residents of the direct provision centre with their friends from the community are holding a peaceful protest.

In the video by The Southern Star, above, a woman from the centre called Evelyn says they are angry that they did not get to meet Fine Gael TD and Minister of State David Stanton to voice their concerns about the centre’s living conditions when he visited the centre yesterday.

Evelyn said they’re requesting that Mr Stanton returns to the centre to meet with the residents.

“We are well-behaved, we are mannered and we are lots more. We do not deserve unfair treatment or anyone speaking on our behalf, as we can speak for ourselves and tell him the actual living condition of Clonakilty Lodge.”

3 thoughts on “Meanwhile, In Clonakilty”