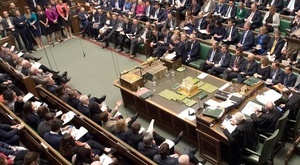 From top: The House of Commons yesterday; Derek Mooney

If you ever start to despair while watching Dáil Éireann live – stop, take a deep breath and think… well, at least it’s not as bad as the House of Commons.

While this may not offer a huge amount of comfort and certainly does not ease the frustration of seeing the current Dáil initiating some decent pieces of legislation, only for them to disappear into a black hole of money messages and other governmental devices designed to stifle debate, it is still something to bear in mind.

For decades I have been listening to some folks here opining on how the UK political and legislative system works better than here.

While some of this may have been driven by an element of cultural cringe, it was also informed by the idea that politics in the UK is more policy driven and based on ideas.

Irish politics, they argue is just too tribal, too based around the centre. We do not have the benefits of the big policy debates and arguments between the left and the right that they have in the UK.

But, the argument goes, it is about more than just the origins of our main parties and their relative positions on political spectrum… British MPs are legislators first and foremost. Not for them the paltry concerns with constituency matters and the parish pump that preoccupy our TDs.

British MPs, it was thought, were able to focus on the national issues and the bigger picture because they were, unlike our gang, in single seat constituencies and therefore not in a constant political battle to fight off party colleagues or constituency rivals.

The problem with Irish politics versus British politics was that we had too much clientelism which informed our political debate from start to finish.

These arguments still have a validity. It is not that we are in some political nirvana and that the pendulum could not bear swinging back a few notches to establish a better political equilibrium, but the proximity to the voters that our system brings means that our TDs are not as tone deaf to shifts in political mood as their British counterparts.

Whatever their faults, successful and attentive TDs in our system are connected to the concerns of the public and do not need polls, surveys or petitions to know what the public is thinking.

I know this is a difficult claim to make in a week when the official homelessness figure went over the 10,000 mark for the first time and we have a Minister for Housing presiding over this outrage who thinks it is “very irresponsible” to promise to end homelessness, but even in today’s Dáil the majority of TDs know this situation is unsustainable, the pity is that few of them are in Leo’s inner circle.

To its credit the Dáil has dealt with the complexities of Brexit with a great deal more skill and cohesion than Westminster. Rather than turning the issue into a partisan battle full of red-lines and unachievable demands, parliamentarians here have worked together via a series of all-party committees.

It is not that politics stopped, it is just that it saw boundaries. Fianna Fáil criticised the lack of adequate no deal preparations by government and Sinn Féin saw no reason not to keep demanding unity polls, but the work went on.

There were UK parliamentary committees doing some good work on Brexit too, but May’s insistence on putting Tory unity ahead of all other considerations effectively handed control of the process over to the hard-line brexiteers.

And what a company of hardliners they are. It’s not just Rees-Mogg, Raab, Cash and Johnson who have driven the debate into the realms of Fake News.

Over the past few weeks we seen a procession of previously unheard-of Tory and Labour back benchers make claims about the Backstop and adopt positions on Brexit that make you think, thank God you are not my representative.

And remember, these MPs are first and foremost legislators, they are supposed to be the national politicians.

While the British Labour party has some pro-Brexit duds, such as Kate Hoey who advocates the hardest possible Brexit despite representing a constituency that voted 77% to Remain in the EU, the worst of the pack hail from the incongruously named European Research Group (ERG), the Tory anti-EU caucus.

ERG Tory MPs such as Anne Marie Morris, Mark Francois, Marcus Fysh, Andrew Bridgen have shown staggering levels of ignorance on what is actually in Teresa May’s Withdrawal Agreement. Not only that they have each shown no understanding of why the Backstop exists and only prove how far out of tune they are.

Bizarrely, I’m writing this on the day after the House of Commons has had its most sensible and coherent debate on Brexit yet.

While yesterday’s indicative votes did not come up with any options that commanded majority support, it was positive to hear many MPs focus for the first time and the realities of Brexit and the complexities and limitations of various ways forward on offer.

What a pity that Westminster go the route of indicative votes some months back when it was suggested by the likes of John Major and Bertie Ahern.

Setting out the options and discussing them one-by-one has enable some MPs to focus their minds on what is achievable, rather than just on what they want to see happen.

As Margaret Beckett said as she opened her contribution to the debate yesterday:

Beckett, a former Labour party Deputy Leader made what was probably the most insightful speech of the day. She picked up on what now appears to be shifting public mood on Brexit, saying:

“Consider the possible consequences for trust in politics or for social peace if this House forces an outcome on the people of this country that they no longer desire—that really would be the undemocratic, establishment stitch-up of all time.”

I say “appears to be a shifting” view as the polling data is not showing dramatic changes, though the doyen of British pollsters Prof John Curtice says the result of the latest British Social Attitudes Survey, corroborated by various polls:

“...is enough to raise doubts about whether, two and half years after the original ballot, leaving the EU necessarily continues to represent the view of a majority of the British public”

Whether Theresa May’s spectacular mishandling of the whole article 50 process is driving this shift, is debateable, there is no doubt that her chronically poor messaging and insistence on over promising and under-delivering made the selling of her deal unnecessarily fraught.

And recall that this was the easier part of the two stage Brexit process. May’s Withdrawal Agreement is the basic divorce stage. It addresses the arrangements for simply leaving, the more complex part which is about the future arrangements with the EU has yet to come.

And, I have discussed all of this without once mentioning the DUP… so, hands up who thinks that this British Government or House of Commons is capable of handling the next phase?

11 thoughts on “Derek Mooney: It Even Makes The Dáil Look Good”