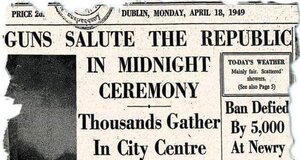 This day 70 years ago – 18 April 1949 – Ireland officially became a Republic, leaving the Commonwealth, and repealing the 1936 External Relations Act.

A 21-gun salute was fired from O’Connell Bridge, and in Cork, old IRA veteran Tom Barry read the 1916 Proclamation at City Hall. pic.twitter.com/jOC7eoVzZj

On This Day, 1949, At midnight the 26 counties of Ireland officially leave the British Commonwealth. Ireland was to become a republic on the 18th. Crowds packed on to O'Connell Street bridge to see a 21 gun salute. It was 3 minutes late due to the massive crowds. pic.twitter.com/H7UXOz7Dml

The Rock And Hard Places