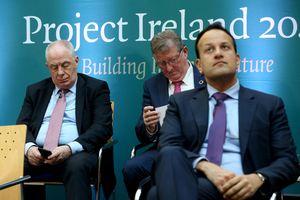 One of the major myths of capitalism promoted by its supporters is that it encourages innovation. That the best battle it out to rise to the top of the economic system, profit, and become household names.

If that was the case then why the need for massive transfers of wealth to the private sector via the state? The reason for this is because the myth of capitalism is indeed not only a myth, but a fatal flaw in the system.

Its insatiable need for new markets and constant profit is a result of it struggling to survive. And in that struggle it has always found a willing assistant in the state. Hannah Arendt argued that the colonialist and imperialist expansion of the European powers was because of the requirements of capitalism. New markets and increased profit were needed. Therefore, the might of the state was to be used to ensure this.

The same pattern continues today. Capitalism is continuing the same search but in a world where most of the markets have been filled; there is nothing more to exploit. But, there is always the chance to return to habits of old and exploit the common people directly.

In Europe, and especially here in Ireland, banks seeking out more profit by being reckless and breaking the law had to be saved, i.e., bailed out, by the government in order to ensure their profit margins were not affected. Essentially, an upward transfer of wealth. Banks profit, developers have their debts wiped, and the general population is left with the bill.

And we see this played out again and again – history repeating itself as farce – with the cost of construction of the National Children’s Hospital reaching nearly €2 billion. The more profit the better, just as long as the right people and the right companies do the profiting.

Never mind questions about private meetings the now former Minister for Communications, Climate Action and Environment Denis Naughten had with the head of the then last remaining bidder on the broadband contract.

This is the same group which the government has decided to award the contract to. It’s also the same company who will own the broadband system once construction is complete and before they’ve even fronted most of the bill for it.

An article in The Sunday Times yesterday revealed that the company will be paying less than €200 million into the roughly €5 billion project.

As David McWilliams points out in the Irish Times, it appears that the investment they make will in part be funded by people paying their broadband bills.

We should be shocked. In a country with a functioning democracy and appropriate oversight the citizens would be shocked. Instead, we are resigned to the fact that this has happened before and will happen again.

The litany of controversies during the lifespan of our state has made us complacent; a case of having seen one controversy, seen them all. And given the scale of bank debt that was laden on us, a few billion for a national broadband network seems like small change by comparison. But we should be shocked and we should be angry.

We should be angry at a system that has been set up to reward private investors at the expense of everyone else.

We should be angry at a system that allows the health system in the country to slowly deteriorate so that it eventually be completely privatised.

This same system thought it appropriate that the average person on the street should shoulder some of the massive debt belonging to banks.

Being part of the so-called sinister fringe should be seen as a badge of honour. It means that you believe that basic services that people rely on every day should be in the hands of the public.

They shouldn’t be in the hands individuals and companies whose ethical horizon extends only as far as their quarterly financial statements. The idea that there are certain things that shouldn’t be exploited for a profit and could – horror of horrors – be operated at a loss for the public good is completely alien to these same individuals.

And as much as services like water and health should remain in public hands, the national broadband network remain there too. Like it or not our societies rely on the internet for basic functions. The National Broadband Plan is akin to the rural electrification scheme.

Yet here we are. Our government is willing to hand it over to a private company. You could almost say determined given that it ignored the advice of Robert Watt. Watt, the secretary general of the Department of Public Expenditure, warned “against approval of the appointment of the preferred bidder”.

His argument was that it should not go ahead on the basis of affordability, risk, and the effect on other unrelated projects given the cost. He also took the step of saying the risk was “unprecedented”.

But it will go ahead. It has to. After all, a profit has to be made somewhere – just not by us.

23 thoughts on “Bryan Wall: Your Money And Your Broadband”