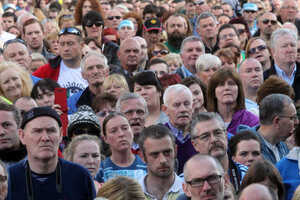 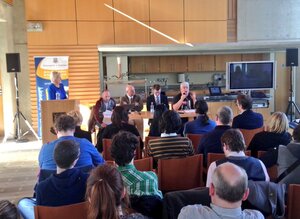 You may recall the use of the term ‘sinister fringe’ in relation to the Irish Water protesters.

Yesterday, at the ‘Journalism in times of crisis’ conference at University of Limerick, Dr Eoin Devereux referenced a study he carried out with Dr Martin J Power and Dr Amanda Haynes in relation to the term.

The title of the study is Reasonable people versus the sinister fringe: Interrogating the framing of Ireland’s water charge protestors through the media politics of dissent.

Their search, on Lexis Nexis, yielded 33 news items that used the term ‘reasonable people’ and 32 that included ‘sinister fringe’ or ‘sinister element’. Of these, 26 – news articles and letters to the editor – dealt specifically with the protests and these 26 formed the basis of their research.

The authors also analysed two episodes of Prime Time and one episode of Newstalk’s Breakfast.

In an agenda-setting interview with Newstalk Radio on 7 November [2014], Minister Leo Varadkar stated that the water protest movement contained both a ‘very sinister fringe’ and ‘a lot of people protesting legitimately and reasonably’.

He described the supposed ‘fringe’ element as ‘sinister’, ‘nasty’ and ‘violent’. These references to the ‘Sinister Fringe’ or ‘Sinister Element’ and their opposite, ‘Reasonable People’, significantly shaped public and media discourse in the following months.

The term ‘Sinister Fringe’ (and, to a lesser extent, ‘Sinister Element’) became a significant part of the discursive strategy.

Following Varadkar’s initial use of the term, the political elite used it regularly in their attempts to fragment and undermine the legitimacy of the protests.

A number of groups were labelled as constituting the ‘Sinister Fringe’, including many which are, in fact, ideologically opposed to one another (such as Sinn Fein, the Anti Austerity Alliance (AAA), and the Socialist Party, amongst others).

However, politicians provided no evidence to support their claims of the existence of such a ‘group’ or its alleged activities.

In our print media sample, there are 17 cases of coverage of the ‘Sinister Fringe’. The term is used within news reports, feature articles, opinion pieces and letters to the editor, which we interpret as an indicator of its reach.

In the mainstream media, practices ranged from uncritical uses of the term to ones that contested or subverted it. As an illustration of the former, one broadsheet told its readers that ‘Health Minister Leo Varadkar again attacked sinister elements in the anti water charge protest groups, as he told Newstalk that dissident Republicans were using the demonstrations to advance their own political agenda’ (Irish Examiner, 2015).

The report does not question the veracity of the minister’s claims, nor does it offer an alternative account.

A counter-narrative to the supposed existence of the ‘Sinister Fringe’ was included within the coverage by The Irish Times, the Irish Examiner and the Irish Daily Mail, but it was missing in the Irish Independent.

Both the Irish Independent and, to a lesser extent, its sister newspaper, the Sunday Independent, rehearse the idea that a ‘Sinister Fringe’ was controlling or manipulating the protest movement for its own purposes.

Thus, one Sunday Independent journalist wrote that: “The sinister fringe which has now attached itself to the anti-austerity movement is not content with drawing cartoons, but it will be drawing blood if those who have influence over their actions don’t wise up quickly.”

It is also noteworthy that the elusive ‘Sinister Fringe’ is associated with the possibility of violence. Source bias, and the use of anonymous sources, is also a central aspect in the representation of this ‘Sinister Fringe’.

Those considered to be part of the ‘Sinister Fringe’ included ‘loony leftists’, ‘thugs’, ‘dissident Republicans’ and ‘Éirígí’. The terms used to categorise them included ‘bandwagon’, ‘disgraceful behaviour’, ‘sordid show of violence and anarchy’, ‘precipice’ and ‘dupes’.

On 20 November, a Fine Gael TD attempted to link the water protest movement to the militant Jihadist group Isis. Noel Coonan’s speech, delivered in the Irish Parliament, warned that the state was potentially facing ‘an Isis situation’.

Coonan suggested that some of the protesters in Dublin wanted to ‘act like parasites’ and ‘live off country people’. In direct reference to the Jobstown protests on 17 November, he branded the protesters’ behaviour as ‘disgraceful’ and suggested that it was ‘socialist led’. Coonan claimed that ordinary people (referred to as ‘the People of Ireland’ and his constituents) were ‘horrified’ at the way in which protestors were behaving.

His comments also included a reference to the seemingly contradictory class status of one of the key members of the water protest movement: ‘elements of socialists, the so-called wealthy Socialist Party, led by Paul Murphy and aided and abetted by extremists within our colleagues here [in the parliament] from Sinn Fein’.

While Mr. Coonan’s attempt to link the protest movement to Isis was not taken seriously, it was, nonetheless, widely reported. From a discursive perspective, it attempts to discredit the protest movement by establishing an opposition between an imagined ‘us’ and ‘them’, and by calling into question the credentials of some of the movement’s key activists.

Notwithstanding its hyperbolic tone, the statement is of significance because it echoes the broader narratives sponsored by the political elite and many commentators in privately owned mainstream media.

More rarely, the meaning of the term ‘Sinister Fringe’ is inverted by some commentators to describe the establishment, rather than the activists that oppose it.

The term is also used with scepticism by those who wonder whether the large number of protestors (over 100,000) was in fact manipulated by the ‘Sinister Fringe’.

…The second discursive frame in evidence within the mainstream news coverage of the water protests is that of the ‘reasonable people’, which was first used by a former Fine Gael Minister [Ivan Yates], who stated on national radio [Newstalk] that ‘a lot of reasonable people have been out protesting and they are just at the end of their tether’.

The phrase was also mentioned in the following quote, uttered by an unnamed government minister and published in the Sunday Business Post on the same date: “There are people who aren’t going to pay. It is about making it manageable for reasonable people and establishing the basic principle of paying for water.”

Between 16 and 25 November, the Taoiseach (Prime Minister) and four of his key government ministers repeatedly used the phrase ‘reasonable people’ in local and national media interviews, and the variant ‘right thinking people’ was also employed.

The repetition of this term by elite political figures after the protests in Jobstown on 15 November suggests that the mobilisation of this discourse was conscious and deliberate.

We argue that, for the political elite, the phrase ‘reasonable people’ fulfilled two purposes: first, it was an attempt to fragment the burgeoning antiwater charges movement into different groups (the ‘reasonable people’ and the ‘sinister fringe’); and, second, it also constituted an attempt to gain support for what they perceived to be the ‘middle ground’ in relation to the revised schedule of water charges, that was announced at around the same time.

Neither they, nor the journalists who wrote the reports, make any effort to identify who the ‘reasonable people’ actually are.

The use of specific descriptors within our sampled newspaper articles (Sinn Fein; AAA; ‘loony left’; ‘Marxist Leninist Republic’; ‘hard line’; ‘unapologetic defiance’; ‘rabble rousing’) function to imply, instead, who the ‘reasonable people’ are not.

The ‘reasonable people’ are assumed to be the majority, which is separate from the minority ‘sinister element’ or ‘fringe’ and their ulterior political motives. We would argue that the attempt to appeal to the ‘reasonable people’ was influenced by the scale of the water protests, which demonstrably included a significant number of participants who would ordinarily be considered to be part of the ideological middle ground.

We identified a total of nine instances in which the term was used within the print sample in November and December.

Our analysis indicates that there was source bias, infrequent reference to alternative explanations and a lack of actual evidence to substantiate claims and counterclaims.

Overall, these practices contribute to the reproduction and circulation of hegemonic discourses. It is notable, for example, that two newspapers in particular – the Irish Examiner and the Irish Independent – reproduce the construct of the ‘reasonable people’ without offering their readers any counter narratives.

In one Irish Independent opinion piece, for instance, the author refers to ‘the emergence of a violent, aggressive element taking to the streets’, using the water protests as ‘a vehicle to foment anarchy and intimidation of other citizens, including ministers’.

The unidentified ‘hardliners’ are accused of ‘stoking up all this unrest’ and are ‘beyond reasonable persuasion’. While in a small number of instances (3) the term is either criticised or used ironically, in the majority of cases (6) the term ‘reasonable people’ is used uncritically.

The term ‘reasonable people’ was also used frequently by the political elite in a broadcast media setting.

Junior Minister: ‘Most reasonable people you talk to accept the system [the existing water system] is wrong’.

Programme Presenter: ‘But there were a lot of reasonable people [ … ] people who said they had never gone marching before, they are not convinced by anything your government has said’.

Junior Minister: ‘Correct … part of our job is to actually convince them … the reasonable person … I think there is some people you’ll never convince … I mean people like [names a Socialist Party member of parliament] don’t want to pay water charges forever, for anything … that’s their choice … most people that I talk to accept the principle that water charges … ’

Programme Presenter: ‘Not on those marches … ’

Junior Minister: ‘[ … ] Most of the people that I talk to accept the principle done right, done fair, done very clear. The principle of user paying is acceptable to most people if they believe that it is affordable. We have to convince them that it is’.

The notion of legitimation lies at the heart of the repeated attempts by the political elite to distinguish between reasonable protesters and those who are not.

There are discernible differences between the content of the mainstream print media coverage and what is in evidence in the television coverage of current affairs. The conventions of the latter – to be ‘balanced’ and to present both sides of the story – results in a type of coverage that is not only more nuanced, but also more likely to include counter-hegemonic arguments.

However, the privately owned print media (in the main) present its readers with an uncritical reproduction of the hegemonic and oversimplifying discourses concerning ‘reasonable people’ and the ‘sinister fringe’.

In constructing and popularising the frame of the ‘sinister fringe’, political and media actors seek to employ discourse as practice and divide ‘Right to Water’ protesters from one another and from the rest of the Irish public.

In turn, that public, framed as ‘reasonable people’, is classified as such as long as they accept the arguments in favour of the new charges and align themselves with the proponents of the new measures.

This discursive alignment between ‘the public’ and the State seeks to erase ‘an antagonistic us/them dynamic [which] creates a sense of political enthusiasm and precipitate participation in the democratic process’ . Consequently, ‘reason’ becomes an attribute that is exclusive to the State, and is therefore denied to those who challenge it.

Disagreements between protesters and the State are framed as external to the realm of reasoned argumentation and, as a result, they are delegitimised.

The discursive construction of the ‘sinister fringe’ represents, we argue, a struggle for control over the definition of legitimate means of democratic participation in contemporary Irish society.

References to violence, or the threat of violence, constitute an attempt to position ‘Right to Water’ protests as antidemocratic.

45 thoughts on “The Myth Of The Sinister Fringe”