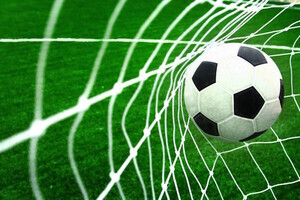 Last week, with a Golden Discs voucher worth Twenty Five Euros on offer, we asked you to name the finest ever soccer-themed song.

But there could be only one winner (at the end of the day).

In reverse order then…

Hard to go against ‘Put ‘Em Under Pressure’, but the Liverpool comeback against Barca reminded me of the line from the Anfield Rap..’ nobody knows quite what to expect, when the red machines in full effect’……Also had John Barnes getting some rapping practice in before cutting loose on ‘World in Motion’…

Strachan by The Hitchers…any song that captures the wonder of watching Mr Strachan perform his art in juxtaposition to a domestic with the missus is special! great chune too!

Italia ’90, two words that conjure up magical memories, summertime and the living was easy, we had hopes and we had dreams. It was like Ireland was 18, she had just finished her Leaving Cert and now had two glorious, sunny, stress free months stretching out in front of her all the way to the horizon. The work was done, the exams taken,results day was unimportant for now.The 80’s were gone, a distant memory. The 90’s were here now, a new era, a new dream. The beautiful game, the beautiful man and his beautiful voice.

The greatest ever football song is “Sunshine on Leith” by The Proclaimers because it’s just a perfect fit for football. The song is a very emotional one. It very much evokes hope and heartbreak. It’s rooted in place. Just as the band are of Leith so are the football club that has made it their own.

That connection to place and belonging is what football and it’s tribalism is all about. I’m not a Hibs fan but I tip the hat to them and their use of this song as a football anthem in particular. They are not an overly successful club. They’re from an area that has had it’s deep problems in the past.

They famously broke a 114 year ‘curse’ by winning The Scottish Cup in 2016 and that relief, ecstasy, the underdog having his day is all entangled with the song and for those reasons I reckon it’s a beauty. Watch this and you’ll just want to sing and sway along.

The greatest-ever football song is “Give Him a Ball (and a Yard of Grass) by the Sultans of Ping F.C because as they put it, “a man can have no greater love than give 90 minutes to his friends”.

A Song For Euro

Playing The Album In Full

3 thoughts on “Nice One, Cyril, Let’s Have Another One”