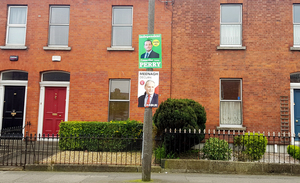 It is hard to know what the main issues in the local government election are but they seem to revolve around two themes: commitments to spend more money and commitments to lessen/reduce/depress local property tax (has the property tax replaced the USC as the most ‘hated tax’?). Spend more, tax less and the let devil take the fiscal hindmost.

All this is being discussed without reference to a very serious context; namely, that the budgetary heart of local government has been ripped out during the austerity years. 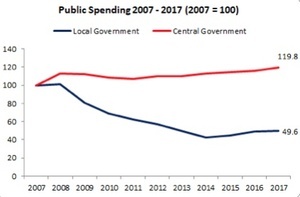 In the decade leading up to 2017, local government spending fell by 50 percent. The biggest casualty is investment: local authority investment (primarily housing and economic infrastructure such as transport) fell from €6.2 billion in 2007 to €1.2 billion in 2017. 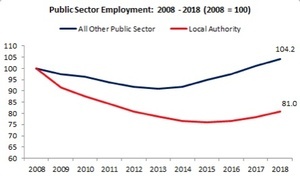 Proportionately, local authority employment carried the burden of public sector employment cuts during the recession/austerity years and is still nearly 20 percent below 2008 levels.

Irish local government was never very strong to begin with. Today, it is even weaker.

Ireland has the weakest local government, as measured by spending levels, in the EU bar Malta, Greece and Cyprus. It is even weaker than Luxembourg which is essentially a one-city state.

So whatever about the party manifestos and candidate slogans, there is a lot less money to spend than 10 years ago and a lot less people to produce the services.

It is unfortunate the campaign ‘More Power to You’ – sponsored by Connect, Forsa and SIPTU – didn’t feature more prominently in the local election debate.

Do we really want a local government that actually governs? Do we want a strong local government system with revenue-raising powers or guaranteed funding from central government; employment levels capable of providing a wide range of services; elected councillors with real democratic powers as opposed to the managerialist regime that currently dominates.

This paper by Dr. Mary Murphy (commissioned by the campaign) details the issues regarding an enhanced local government.

Admittedly, a debate over a radical decentralisation of powers to local levels is hard to kick-start during an election campaign; especially one that is more focused on which party will get more votes and what it might mean for a general election.

Hopefully, this debate can be continued past polling day.

For progressives it provides an opportunity to promote more resources for public services which would be, through a strong local government system, closer and more accountable to people. This would be key to vindicating a strong public service state.

Hangin’ With The 1 Per Cent