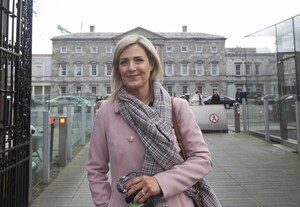 It is likely that the swinging TD fell backwards off the child’s swing onto the back of her head, since if she had fallen forwards from the swing she would most certainly have fallen on her face.

Attractive and all as this picture may be to some, it is almost certain that she simply fell backwards off the swing, because during the fall she also apparently hurt her back and hip, which indicates a backward fall, most likely occuring within mere moments of having taken her seat.

Representatives for the hotel contend that the swinging TD allegedly had both hands full, meaning, we can only suppose, that she was not in a position to hold onto the swing to keep her balance, and simply believed that she could sit on the swing, hands free without holding on, and trust to her safety on what is essentially a moveable seat dangling from strings. The very epitome of instability. A bit like a Labour seat.

So, with no hands, the Fine Gael TD, proud representative of a party who are sternly against litigation culture, allegedly sat onto the swing, the seat of which presumably moved forward under the weight of her TD seat, causing the TD to flip backwards onto her head as earlier described, unable, it would seem, at the first sense of danger, to grab on to anything, since her hands were otherwise occupied; though it is not clear from reports what exactly was occupying her hands, since to state exactly what she might have been holding could prejudice the case, I guess.

It might well have been a smart phone in one hand, or a handbag, or even an envelope, with something similar or different in the other hand, though what that something else might have been in the TD’s hand on “a night out”, no one is brave enough to conjecture.

That there were no safeguards in place to prevent a TD on a night out from flipping accidentally backwards onto her head.

Surely, in a civilized country that boasts a propensity to generously service landlords while leaving 10,000 people homeless, some form of protection could be provided to ensure that TDs on a night out be minded at all times and in all eventualities.

From this perspective the TD’s legal representatives implied that there should be supervisors posted next to swings to prevent such accidents ever happening, as presumably there should also be supervisors posted around all the coasts of Ireland, especially the cliffs, to prevent people falling off the country, particularly people on nights out, with their hands full.

But whatever about the implications of public service supervisors posted like guardian angels all over Ireland, the upshot of the swing tragedy was that the TD, once sufficiently recovered from her somewhat ungracious backflip, and with her TD wits regained, decided to sue the hotel for…well, for €60,000 actually, or two-thirds of a TD’s salary, or €10,000 more than a TD’s pension, or roughly 5 times the amount of the state old-age pension.

One spokesperson speculated that the negligence claim may have been the result of a fit of pique when the TD caught someone laughing as she lay bundled in a heap on her head in a classic Irish Yoga position. This theory certainly has legs. 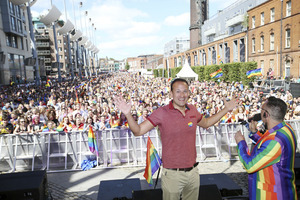