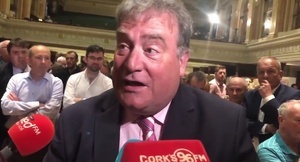 #LE19 @sendboyle is the fifth person to be elected in #Cork city. The former @greenparty_ie TD and Senator was elected on the fifth count in #Cork South Central pic.twitter.com/UINpp6wIsR

Dan Boyle is elected to Cork City Council for Cork South Central and will be among four Green Party councillors in the chamber.

“The Greens have been involved with more on the ground campaigning. We have taken an inclusive approach to social media and the mainstream media and we are making people aware of wider social issues and there have been some very positive engagements.

In terms of people engaging with environmental issues, I would describe it as the ‘David Attenborough effect’ and more young people are coming out to vote.

“I will be seeking meetings with the other parties and groupings to discuss the possibility of a civic charter and vision for Cork over the next five years. The shape of Cork should be a constant conversation.”

30 thoughts on “How Green Was My Tally”