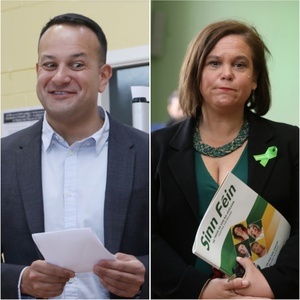 It is almost exactly two years since Leo Varadkar was selected as Fine Gael leader. On June 2, 2017 after a two-week contest involving FG members and councillors, but primarily TDs and Senators, Varadkar was declared the winner.

He beat Simon Coveney with 60% in a weighted ballot in which TDs and Senators had 65% of the total vote, the membership had 25% and councillors had 10%.

While Coveney won the popular vote among the membership (he secured 35 per cent in the membership ballot), Varadkar got the backing of 51 of the 73 members of the parliamentary party.

Six months later, in January 2018, Mary Lou MacDonald was announced to absolutely no one’s surprise as the sole candidate to succeed Gerry Adams. Adams had announced that he would step down after four decades as Sinn Féin leader at a special Árd Fheis the following month.

Where MacDonald was content to calmly succeed her leader at any time of his choosing, Varadkar had been determined to displace his. But, regardless of how they came to the job, they each came to the job with a major political asset: they were the antithesis of their predecessors.

Where Enda Kenny was a Nokia 6310 using, meat and two veg, dinner in the middle of the day man, Leo Varadkar was iPhone8, avocado toast and green tea.

They came with something else, the expectation, if not the promise, that they would greatly improve their parties’ fortunes and lead both to even greater electoral success.

When Varadkar took over in June 2017 Fianna Fáil had been consistently ahead of Fine Gael in the polls by anywhere between 2% and 5% for the previous 12 months.

The TDs who elected him, and as we have seen it was primarily the TDs not the members who backed Leo had the expectation, nay the demand, that Leo improve their fortunes fast and get them back to soundly defeating their Fianna Fáil rivals in the ballot box.

For Sinn Féin the task was clearer and – it seemed – more straight-forward. It was to continue the party’s inexorable progress and show that there was no glass ceiling through which it could not pass.

Mary Lou seemed to offer Sinn Féin a way to break with its past and make itself attractive to a middle class whose backing it needed if it was to develop its support in double digits.

And it looked, for most of 2018 and early 2019 as if both were succeeding. Within weeks of his coming to office Fine Gael’s poll numbers started to dramatically improve: the much-hailed Leo leap.

By Summer 2018 Fine Gael was 9pts ahead of Fianna Fáil in the polls. The same poll showed Mary Lou’s Sinn Féin only 2pts behind the Soldiers of Destiny.

It was like a pincer move with the two new leaders set to each take such a chunk off Fianna Fáil that they may soon see that party off the field and be ready to do direct battle with each other.

Not only was that not to be, the early poll gains started to gradually slip away leading to the point, a few weeks ago where some polls had Leo’s Fine Gael behind Fianna Fáil.

As I said here at the end of April: “We will know which one is right in just over three weeks when we have the results of the Local and European elections.”

And now we do. The electoral gains promised by both Leo and Mary Lou have not only failed to materialise, they have gone the other way. Both leaders have managed to take their parties’ fortunes back to an earlier point.

Sinn Féin is now back in single digit support: 9.5%, but even worse than that; it has lost almost half of its network of local councillors. Sinn Féin’s inexorable march forward is now a messy retreat, which has spread north of the border with its European vote falling there by over 3pts.

On the face of it, MacDonald’s party has fallen furthest, but have no doubt that Varadkar has had even bit as bad a day, he just masks it better.

While he and his close colleagues will point to European Election results, particularly in Midlands/North-West as absolute proof that the Leo leap is real and Leo can still deliver for Fine Gael, the TDs who put him in the job know that success in general elections is based on progress in local elections.

Fine Gael has picked up some extra support in the Locals, but only because it had a bad, a very bad, local elections in 2014. Leo had a low base on which he could very easily build, but he didn’t.

Fianna Fáil not only continues as the biggest party in Local government across the country it is – remarkably – the biggest single party on Dublin City Council.

Fianna Fáil’s vote share is now 2.5% higher than in the 2016 General Election whereas Fine Gael’s is down – albeit marginally.

Varadkar is now presiding over the same level of poor performance for which his backers once bayed for Enda’s scalp. Isn’t he lucky he doesn’t have a Leo Varadkar coming after him?

15 thoughts on “Derek Mooney: A Sad Tale Of Two Leaders”