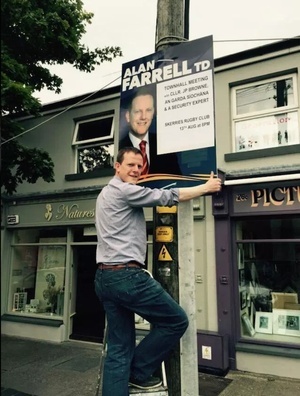 Insurance cheats cheat us all, eh… The hypocrisy of @FineGael

Under cross-examination, the engineer confirmed the damage was “new”, adding that the Fine Gael deputy had told him the car was in subsequent accident, not linked to the personal injury claim.

Judge shown snap of Fine Gael TD Alan Farrell up ladder with poster of himself before he brands his €15k prang injury case ‘unusual’ (Gary Meneely, The Irish Sun, July 10, 2018)

Driver of rented van that rolled into Alan ­Farrell’s Audi says Fine Gael TD was in ‘a rage’ after the accident (Gary Meneely, The Irish Sun, July 10, 2018)

15 thoughts on “Whiplash Away”