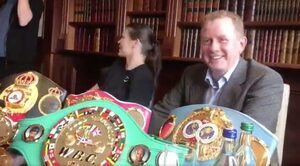 Undisputed Lightweight Boxing Champion of the World Katie Taylor asks during a press conference (with her manager Brian Peters, top) if Sports Minister Shane Ross – a lurking, photo-hungry presence at her arrival at Dublin Airport on Tuesday – is still behind her.

Previously: Give Him A Belt