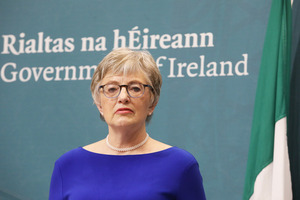 Speaking on RTÉ’s Morning Ireland, Ms Zappone said she had listened to the concerns of adopted people and the changes, in her view, balance the right to privacy with the right to identity.

The new law, which will move to the committee stage in the Seanad today, has been delayed because of concerns about the privacy of natural or birth parents in cases where an adopted person is looking for information.

It is now proposed that the child and family agency Tusla would contact birth parents in relation to any request for information and, if they object to its release, the Adoption Authority of Ireland would make a decision.

Adopted people need their rights respected. Just heard Minister Zappone on @morningireland yet again set limits on adopted peoples’ rights to their own information. I am deeply disappointed by her approach to information rights for adopted people.

It is not at all clear how adopted people’s rights will be safeguarded by the above process, especially given Tusla’s poor history

This proposal is completely out of step with European norms. It is also a disproportionate measure which assumes adopted people are a “threat” to their natural parents’ wellbeing.

Once the new legislation is passed, the Attorney General is proposing that people adopted in future should have automatic access to their full file once they reach adulthood.

So these are discriminatory provisions affecting people adopted in the era of the laundries and the Mother and Baby Homes.

Together with proposals under the Retention of Records Bill 2019, which will seal testimonies of records of child abuse for 75 years, this legislation shows that the state is not willing to face up to the past.

If anything, this imposition of state control reinscribes the shaming and silencing mechanisms used against natural mothers under Ireland’s regime of forced (and often illegal) adoption.

People must have access, at a minimum, to their unredacted early life records *and* to their birth certs (which are already public records).

Natural mothers should also be able to access their state records.

Amendments to the Bill could also be used to establish meaningful information, matching and tracing services and an independent archive of relevant records.

There is a lot more wrong with the Bill, but the basic assumption that this category of adopted people should be quarantined in this way is highly objectionable and should be resisted.

Oh and before the AG says “but the Constitution”, there is no absolute constitutional right to anonymity. The right to privacy of natural mothers must be balanced against the right to identity.

And anyway framing this as “mothers vs adopted people” isn’t the point. Adults are capable of navigating this information regime, and the state should assist them to do so, not continue to frustrate them.