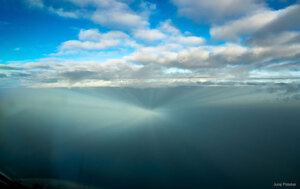 Is there ever anything interesting to be seen in the direction opposite the Sun? How about an antisolar convergence of crepuscular rays? To wit:

In the featured rare image taken from an airplane in mid-April, these beams were caught converging 180 degrees around, on the opposite side of the sky from the Sun, where they are called anticrepuscular rays. Therefore, it may look like something bright is shining at the antisolar point near the image centre, but actually it is reverse-shining because, from your direction, light is streaming in, not out.

2 thoughts on “It’s Behind You”