Rural Wifi, which was launched in 2015, claims to be the first Irish company offering both wireless and satellite broadband across Ireland.

They say using a combination of their router and antenna technologies mean they can get rural customers speeds of 30Mbps.

CEO of Rural Wifi Patrick Cotter – who founded Fleetconnect in 2008, which provides mobile wifi for clients such as Irish Rail and Bus Éireann – writes:

“In the last couple of months, we have been active on the ground in Leitrim and Monaghan -the worst two counties in Ireland for broadband penetration. The take up has been fantastic.

“We are now planning the next steps for further counties over the coming month, testing our service while putting up posters, signing up new customers and installing within short time frames because our teams are already on the ground.

“In Meath, I’m planning to help people be connected with up to 10mb by the end of the year. We need to close the Digital Divide as soon as possible.

“We recently said we’d come to the remote Aran Islands and we did. We installed Rural Wifi into the home of one family with three young kids. They had no internet until then and we got them up to 15 MB per second.”

Rural Wifi offers plans starting from rolling 30-day contracts with packages available from €48 per month for 100 gb data including installation, to unlimited data from €65 per month with a 14-day money back guarantee if the customer isn’t happy. 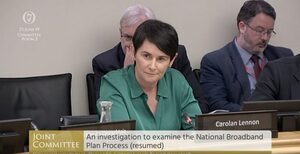 This is a fifth of the estimated final cost of the project under the preferred bidder Granahan McCourt and a third of the sum the State has agreed to invest in the plan.

“I think the Minister got too close to the Granahan McCourt consortium; the political and electoral imperative took over and the issue of cost in the Government’s requirements went out the window.”

“…Given that the costs have ballooned even from the estimates of 2017, never mind the original estimate of €500-odd million, the Taoiseach has been too dismissive of those who have raised legitimate questions about this and of yesterday’s Eir submission, which deserves further analysis. Alternatives should be considered.

“The Taoiseach might have felt the need to make a big political announcement before the local elections but I return to the words of the Secretary General of the Department of Public Expenditure and Reform, Mr Robert Watt, who said there was cause to pause and review. I ask the Government to do that now.”

In his response, Taoiseach Leo Varadkar said that, following on from Ms Lennon’s comments, the Department of Communications had written to Eir to seek further clarification, saying:

“We should not forget that Eir took part in the process and made an initial bid for €2.7 billion, which was higher than the initial bid from Granahan McCourt, and then pulled out of the process, citing the fact that the risks were too high and the level of oversight too onerous, and refusing to make any commitment around the equity investment it would make.

“It is, therefore, a big turnaround that the company is now saying that it can do the project for €1 billion. If that is the case then I am all ears and we must listen to it.

“We need to know whether this offer is real and stacks up, and what kind of delay would be imposed on people in rural Ireland waiting for broadband if we went back to a new procurement process.

“Everyone understands that neither a private nor a State company can just be given a contract; there would have to be a new procurement process. We also need to know that anything done would be within state aid rules and EU procurement law. A letter was issued today by the Department to Eir seeking that information.”

“The question is: What exactly is Eir describing in its new model?” – Minister for Communications Richard Bruton tells @TodaySOR the Government wants to hear the details, after Eir claimed it could deliver broadband across the country for €1billion. #TodaySOR

“We do not see a cheaper way of doing it, that is compliant with State Aid rules… but we’re making sure that there isn’t information here that would materially affect our decision to sign the contract [with Granahan McCourt]” – Minister Richard Bruton, on @TodaySOR @RTERadio1