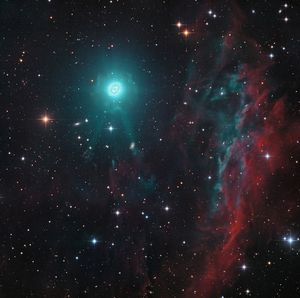 Behold: NGC 3242 – the cast off shroud of a dying sun-like star known as The Ghost Of Jupiter Nebula. To wit:

…this deep and wide telescopic view also finds the seldom seen outer halo of the beautiful planetary nebula at the upper left, toward Milky Way stars and background galaxies in the serpentine constellation Hydra. Intense and otherwise invisible ultraviolet radiation from the nebula’s central white dwarf star powers its illusive glow in visible light. In fact, planets of NGC 3242’s evolved white dwarf star may have contributed to the nebula’s symmetric features and shape. Activity beginning in the star’s red giant phase, long before it produced a planetary nebula, is likely the cause of the fainter more extensive halo. About a light-year across NGC 3242 is some 4,500 light-years away. The tenuous clouds of glowing material at the right could well be interstellar gas, by chance close enough to the NGC 3242’s white dwarf to be energized by its ultraviolet radiation.

2 thoughts on “The Ghost Of Jupiter”