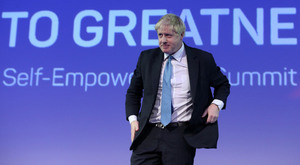 So, it’s Boris. I suppose, if I want to be true to the spirit of Boris Johnson, I should have written two columns on the outcome of the Tory leadership election and not just one.

One for if he wins. One for if he loses. Both claiming with equal and absolute certainty that I knew this would be the outcome.

Instead, I have opted to do it the old-fashioned way and write just the one piece after the result was confirmed.

Today’s selection of Boris Johnson, by 66.4 per cent on an almost 90% turnout of the Tory party membership, as the new leader and next prime minister is hardly surprising. At least has not been that surprising since round one of the MPs vote to pick the two final candidates.

His confirmation as Prime Minister of the slowly disuniting Kingdom of Great Britain and parts of Northern Ireland tomorrow afternoon will at the same time, paradoxically, change nothing and everything on Brexit.

It changes nothing in terms of the actualité, none of the details of Brexit have changed. The EU 27 remain as committed to the letter and spirit of the Withdrawal Agreement negotiated with Teresa May’s government as they have ever been.

The EU 27 has repeatedly said clearly and unambiguously that they are not willing to re open any of the issues agreed in the divorce arrangements, most especially the Irish Backstop.

Johnson’s hope that the issue of the Irish Border (and the Backstop) might be put on hold and shifted from the Phase I negotiations on the divorce to the phase II talks on the future trading arrangements will not be entertained.

The EU has already made this abundantly clear.

It has been listening to what Johnson and Hunt have been saying during their leadership bids and it can see that neither has said anything to suggest a readiness on the part of the UK to make serious proposals to break the logjam and avoid a no-deal Brexit.

But they also know that this change of leadership in Britain is still a major political moment.

While the dismissal by many of Johnson’s rival, Jeremy Hunt, as just being continuity Teresa May, was cruel there was more than a little truth to it.

The election of Boris Johnson is in some ways a repudiation by the Tory membership of Teresa May, though perhaps more of her style than her substance.

Johnson is the antithesis of his predecessor. Where she was assiduous and sharply focused on detail, Johnson is a broad strokes guy, whose disdain for consistency is only surpassed by his passion for and belief in the power and force of rhetoric.

Johnson understands the theatricality of politics better than almost anyone else in British politics. He has shown considerable skills at both playing and using the media to pursue his ambitions. Across his political career he has sought to at all times portray himself as the person he thought the majority of voters wanted.

He has the classic politician’s need to please and be liked. The tool he uses to achieve this is himself: his personality, his persona, his humour and above all his rhetoric. Here I refer to classic rhetoric.

Aristotle defined it as “the faculty of discovering, in any particular case, all of the available means of persuasion” while Plato described it as “the art of enchanting the soul.”

We saw a short burst of this in Boris’s remarks upon being declared elected this morning. He spoke of energising Britain, of getting Brexit done on Oct 31st, of returning the spirit of can do and of pinging away the guide ropes of self-doubt and negativity.

But the future of Boris Johnson entirely hinges on delivering a Brexit that works.

And this is where the opportunity lies. The new leader with his command of language and the power of rhetoric now has a moment, that is rare in politics, where he can take the lead and do something his predecessor serially failed to do and that is to define Brexit in terms that are deliverable.

He can use the occasion and power of coming days to define Brexit in a way that allows him to eventually get the Withdrawal Agreement passed and move the focus of his negotiations with the EU27 to the political declaration that accompanies the withdrawal agreement.

That is where he has scope for setting out the shape and nature of Britain’s future trading, security and political relationship with the European Union.

As a historian, a rhetorician and above all as a devotee and biographer of the great British political rhetorician of the 20th century Winston Churchill, Johnson will know the potential power of this moment.

He has a chance to exit the morass that May allowed to develop around Brexit and to use his mandate from the membership to direct their attention to a place where a workable Brexit can be delivered.

If he signals that he is willing to seize the moment – and it is a very big if – then the EU27 can respond by moving its focus to the political declaration and moving the agenda forward to how it sees its long-term relationship with the UK.

Indeed it did so this morning via a tweet from {Eu Brexit negotiator] Michel Barnier, saying:

We are ready also to rework the agreed Declaration on a new partnership in line with #EUCO guidelines.

But the ball still lies firmly in Boris’s court.

There he explained that the Backstop is an insurance policy which we all hope will never have to be drawn down and which can be replaced by the alternative arrangements the Brits want, just once they can be shown to work in practise.

The next few days will tell a lot.