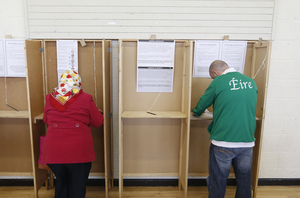 One of the colourful phrases made by Brian Lenihan Senior, the perhaps unwitting wing man of the Haughey era, was his opposition to what he called ‘the futility of consistency’.

By his logic to be consistently consistent was to be closed to the need to be adaptable, to be flexible, to be pragmatic. To him, the essential tools of the modern politician.

To others it highlighted the vacuousness of his and his party’s philosophical approach to politics.

That of the catch all political party unencumbered with principles, free to move with prevailing winds, seeking the support of most whose collective opinion they sought to reflect, whilst seeking to cause the least offence (or alienation) to others.

Principle should be immutable. Almost. There has to be some room for Damascene conversion.

Strongly held, lifelong principles, shouldn’t be easily jettisonned. When they are it is for the holder of such principles to realise that they are wrongly held, that they may lack a sufficient basis in reality, or if ever applied they may result in unintended consequences.

Policies should always be adaptable. They are dependent on resources and conditions. They are prioritised against other policies. They have to be timetabled in terms of their implementation.

Prioritisation and implementation depends on negotiation. This occurs within political movements, about the political system, and should most importantly exist among the general public.

Strategy is the third part of this political Trinity. It is the means to the ends. The ends being implementing policies to widest possible degree in the quickest possible time.

This can be done through creating awareness, informing public debate, swelling a groundswell of concern leading to calls for action. This is more effectively done by campaigning organisations than it can be by political parties.

Those, individually and collectively, who seek and attain public office comprise themselves by doing so. In democratic societies it is necessary that they do.

In the two and half thousand years of modern democracy we have evolved far too slowly. We have yet to see one hundred years of universal sufferage, and that only in limited parts of the World.

Along with the right to choose, the right to be given an adequate choice should also exist. Again this is limited to far few places on the Planet.

Maintaining power, with the ability to make most decisions on 50% of the vote, remains a perverse Interpretation of what democracy should be about.

The more we weight majorities, and the greater use we make of such mechanisms, the more engagement with others has to be entered into. Surely the essence of democracy.

These are the principles that matter. What matters is the ability to engage the maximum number of people, making as many decisions as possible, in the most informed way, with the widest availability of choice, to the deepest degree of agreement.

By seeking to eliminate winner takes all democracy, we begin to question our hard core beliefs. We increase the need to co-operate with others, especially with those with whom we agree with least.

Politics that is more diverse is also more competitive. More competition on ideas places more threats upon the existence of traditional all things to all people political parties.

How does this lead on from Brian Lenihan Senior’s glib pronouncement? Let’s say he was half right but in the wrong way.