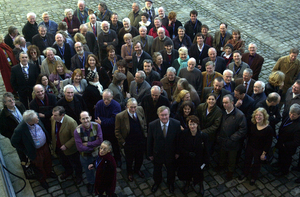 Fintan O’Toole’s recent suggestion in the Irish Times that art should be called sport was yet another jibe at political Ireland’s ongoing neglect of the arts. It seems sport fares better in the funding game. Even greyhounds get a bigger slice of the public pie.

But this neglect may be the fault of the arts sector itself which, on the face of it comes across as politely apolitical.

Another recent article in the Irish Times said that Aosdána was an excuse for low arts funding in the broader sector, Ireland having the lowest arts funding in Europe, despite the oft-heard boast of being the fastest growing economy in Europe.

Aosdána is as quiet as a grave, politically speaking, sending out an inadvertent message to the rest of the arts community that there is a bit of the old I’m-alright-Jackism about the whole thing.

And yet, when it comes to arts funding, the government can point to Aosdána as something supremely progressive. There was an article in The Guardian recently describing Ireland as arts-funding trend-setters because of Aosdána.

But despite this apparent success – Aosdána only caters for 250 artists – the wider arts community is hopelessly under-funded and often more than a little politically obsequious.

Declan Lynch, writing in the Sunday Independent of July 28 about the recent spat between Colm Tobín and the Irish light-lit fraternity, for want of a better term, remarked on the customary silence of the Irish arts community. There was that word again. Silence. Lynch wrote:

“There is this terrible niceness about the world of books, in public anyway…”

That niceness runs right through the arts sector and is often equated with positive thinking, in conscious contrast to traditional Irish begrudgery. So, criticism becomes perceived as negative thinking; while sweetness, often concealing acid barbs, is the general tone of the arts world.

We saw some of this acid in Marian Keyes retort to Colm Toibin’s relatively innocent remark about genre literature, when she said, “Sez the lad who wrote the Maeve Binchy pastiche and managed to persuade people it was literary fiction…” Ouch.

The point Lynch makes is that the culture is the lesser for the absence of this kind of barbed repartee. In other words, we could do with more stuff like this coming from the arts community.

Instead, revealingly, this only happens when someone’s patch is intruded upon. Outside of that, everyone is smilingly nice and polite, daggers concealed.

And there are daggers in the arts community, make no mistake. A sector of diminishing funding and respect, it can become very dog eat dog in the arts funding stakes. And the only ploy people appear to have is to be upbeat and smiling. Smiles, it is believed, will eventually win favour.

Even as wages go down or stagnate and the unions are destroyed, people keep on smiling that positive corporate smile, in the hope that this will somehow improve conditions. It doesn’t. Things get worse.

The arts in Ireland is employing a similar hopeless strategy, with similarly hopeless results. Neo-liberal politicians will eat those winning smiles for breakfast while smiling back and diverting public funds elsewhere.

Politeness suits the stalling games they like to play while they are seriously busy elsewhere, like selling off Connemara to international gold-mining prospectors.

While the political silence of the arts sector might suggest a sector that is apolitical, the reverse is actually the case. The sector is deeply political. Aosdána’s very structure and foundations are permeated by political thinking. It’s day-to-day business is political.

An idea given the green light by Charles Haughey, some critics believe that Aosdána was intended to impose political silence on the story-makers and image creators of Ireland. If that was its intention, it worked.

And built into the structure of the institution is a quite brilliant political neutralising dynamic, based on the old principle of divide and conquer. Membership is limited to 250 artists. (It was originally only 200.)

Due to the limited numbers, not only does an aspiring entrant have to wait for a sitting member to die [now there’s a plot for a detective novel] but they also have to win the favour of two sitting members to nominate them.

Think of the smiling and fawning and the secretive manipulations that this encourages.

The entire structure breeds fear, uncertainty, exclusivity and, perhaps most importantly of all, relative political silence.

It creates a divide of haves and have-nots in the arts community, spreading the same political silence in a community where everyone knows instinctively that the only hope in a shrinking sector is refuge in Aosdána.

Even the art produced in Ireland seems politically neutered. Where are the plays pulpit-thumping about social injustice and austerity?

Laughably, one of the few “writer/performers” who had anything critical to say about modern Ireland from the Abbey stage in recent years was the economist David McWilliams.

I suppose we shouldn’t be too surprised really. After all, we don’t live in a country or a culture anymore. We live in an economy. Economics is the new national drama.

And then there is that annoying subtext running through the culture that art is for kids and students, and that kiddy arts events are designed to provoke childish wonder in adults. To help them rediscover their inner child, I guess. More American positive-thinking bunkum.

This corporate infantilising of the arts is a betrayal of those who believe arts is for grown-ups; a valuable forum for individual expressions of love, liberty and community; and, in times of oppression, a place where people might speak truth to power.

But for many in the Irish arts community, the development of a relationship with a minister for culture is the prime ongoing work in progress, regardless of who the minister is or what their moral proclivities might be.

This is what happens when arts funding is withheld to the stingy level it is withheld in Ireland: the political establishment makes obsequious beggars of everyone, and political silence is the inevitable result.

Arts funding structures as they currently stand, and the networking that goes with them, don’t make artists, they make politicians; and often these political structures produce arts charlatans, whose true art is networking, jockeying for position around the public money pot, becoming the public face of arts practise.

Because of hidden class advantages in the system it is inevitable that only a certain class of people will be funded and represented.

That the wider arts community will become narrow and exclusive and will, despite its perhaps best intentions, end up producing art that reflects the interests of the political elite.

Since politicians and bureaucrats are currently scratching their heads about how to “identify” genuine artistic talent to support – presumably by funding a bureaucracy to investigate the question – the answer is plain to see: fund everyone with a basic income and leave the artists to cultivate themselves.

It’s what they do anyway, even despite the funded professional facilitators politicking for position between the artists and the public funds set aside for them.

From there, people can make informed decisions about what they want to do with their time. If they want to work to increase their income by taking on a mind-numbing job, let them do so, to the extent that this pleases them. .

But people so inclined or driven to respond to some artistic impulse will likely use the stipend to devote their time to their art, to the benefit of the wider culture.

Given where we are now with climate change and late-stage capitalism, the national campaign for the arts might be best widened to campaign more broadly for a basic income for all, taking cognisance of the growing need for a centralised cultivation of creative and artistic thinking and practice.

Now that truly would be leading the way.

6 thoughts on “Eamonn Kelly: We Have Our Fund And That’s All That Matters”