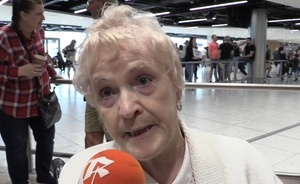 Magdalene survivor Mary Cavner (O’Sullivan) has been awarded a five-figure settlement after she was forced to do unpaid work at the Good Shepherd Convent (top) for nearly six years.

The mother of five spent years trying to convince the State she worked at the Good Shepherd Convent in Co Cork, from the age of 11 after her dad’s death.

The Government formally apologised to all of the women confined to the Laundries in 2013 and set up a redress scheme for the victims.

But Mary, who now lives in England, was denied compensation after the Irish authorities claimed she was at St Finbarr’s Industrial School which was not listed as part of this scheme [see below].

The Ombudsman ruled Mary is eligible for the redress scheme and awarded her the cash.

“They held me there and worked me until I was nearly 18. We weren’t allowed to talk or associate with anybody else which affected me throughout my life.

“To then be told that I was lying was devastating. I had never mentioned what happened to me to my husband or my children, so it took all of my courage to admit what I had been through and then they called me a liar.

“My experience in the laundry left me unable to communicate properly. I have had really low points as they have made me live this again and to be accused of not telling the truth made me feel rejected.

“I am speaking out as I want to tell all of the women who went through this but don’t have a voice to stand up and fight.

“This was never about getting compensation as whatever money they had given me it wouldn’t give me my lost childhood back.

“This was about holding those who made me stay in that laundry and work throughout my childhood to account.”

Did Kathleen Get Anything?