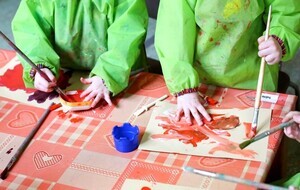 From top: Painting at the Abbey Day Nursery which has been closed by TUSLA in the wake of the Hyde and Seek scandal; Terry McMahon

Sickened having to write this. Everyday when I picked my daughter (above) up from the not-for-profit nursery in the city the children would shout in unison, “Be the monster!” I’d have to put all the crap of the day aside and become their imaginary monster.

The kids would scream and run around that huge downstairs room until everyone was an exhausted mess. None more so than me. Then they’d shout, “Go to sleep!” I’d slump to the ground and curl up in pretend slumber.

Except it often wasn’t pretend. I’ve had four kids attend this nursery over the years so, as I’d shut my eyes and grimace at the pain in my knees, I’d think, “I am literally too old for this.”

The kids would tentatively poke their sleeping monster. Their excited giggles would become high-pitched squeals until the monster would growl. They’d scream and back off, only to become braver and advance once again.

Their imaginary monster would roar and stand up to pursue the screaming lunatics all over again. It was exhausting. It was worse than working out in a gym. But as my daughter watched her deadbeat dad with pride it was often the highlight of my day.

Like many others creches in the city that not-for-profit nursery is a profound place. Located across from The Garden of Remembrance it is called The Abbey Day Nursery, and for the last 26  years it has been run by one of the most remarkable women I have ever met, Deirdre Moore.

This gift of a human being has done more for children than can ever be quantified and she’s just about to burst open those beautiful nursery doors once again to welcome all nationalities from all walks of life in Dublin’s north inner city.

Except the nursery doors have just been bolted shut.

By an incomprehensible force.

By an organisation increasingly under disturbing scrutiny.

Under the leadership of Deirdre Moore, these children at The Abbey Day Nursery learn much more than the necessary basic skills. They learn to be non-judgmental of other cultures. Of other races. Of each other.

At my last count, there were nine different nationalities shouting, “Be the monster,” in that glorious downstairs room. Yet every one of them played without prejudice.

They learn that forming deep-rooted friendships with the ‘foreign’ on both sides becomes just as natural as loving the ‘local’ in each other. Seeds are sown that blossom into a life-long fearlessness of the ‘other.’

But there was another creche across town that developed the darkness within. A private for-profit creche that fostered fear in children. A cancer that extorted cash from parents who paid to believe their kids were safe.

If a fiction writer had named this creche they’d be accused of being too on-the-nose in their comic book evil description.

Located on Dublin’s fancy Botanic Road, the creche that would become a national scandal after an undercover sting on PrimeTime Investigates is called Hyde and Seek.

A woman who has brought horror to children’s lives and nightmares their parents, the woman behind Hyde and Seek creches has made profits from the misery she has caused to the tune of millions.

TUSLA did a little mooching around, imposed a few easy-to-pay fines.

The Abbey Day nursery is shut down but no doubt at the soon-to-be rebranded Hyde and Seek everybody will be welcome. As long as your folks have cash. Lots of cash. And no conscience.

TUSLA is now using the righteous outcry over the scandal of Hyde and Seek as leverage to investigate other nurseries.

They arrived at The Abbey Day Nursery and declared the nursery needs an alarm. Nothing wrong with that. There are multiple alarms in the building already.

But this alarm is different. TUSLA are demanding that a not-for-profit nursery which has been operating without incident for twenty-six-years pay ten grand for an alarm.

TUSLA has also determined that the children need an outside playing area. In the city centre. Despite the vast open space of The Garden of Remembrance being fifty feet away.

It has a twenty-six-year legacy of legacy of inspiring countless children to rise above their limits.

The Abbey Day is not the only not-for-profit nursery to be punished for the actions of a private creche.

Talk to parents. It’s happening all over the country. And when enough not-for-profit nurseries are shut down the only option for parents will be to find some way of sourcing non-existent finance to send their children to a private creche. Oh, wait, perhaps that was the plan all along.

No matter what you are found guilty of in Ireland, if you are in the correct club we will reward profiteering mercenaries making money from the vulnerable. We will reward the carnage created by organisations that should be under criminal investigation on multiple fronts.

We will reward the cancerous policies of a Government that is willing to use the lives of children as pawns for political gain.

We will reward anyone who makes it clear that Ireland is no place for any child who does not have the necessary socio-economic stamp of approval to participate in that costly but cosy club.

Meanwhile, we will continue to punish cash-strapped parents who want their children to have the opportunity to engage with other children of all nationalities in a structured and beneficial environment that is not driven by commerce.

We will punish singe parents who will never be able to afford private childcare. We will punish staff whose salary was already too low for the incredible work they were doing but who now have nothing. We will punish a woman who should be sainted instead of fired.

But nobody will say a word.

Those beautiful children have yet to learn that there are profiteers at the door willing to rip away their future. Every day I picked my daughter up from that nursery those kids shouted, “Be the monster!” In their innocence they didn’t know that the monster is no longer imaginary.

They don’t know how real it is. How dangerous it is. Because, for reasons that defy comprehension, their paralysed parents won’t stop it.