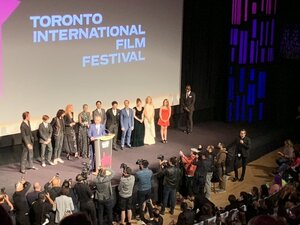 THE GOLDFINCH is one of the worst movies I’ve seen all year. It’s shockingly bad. https://t.co/VJdD9rLDP1

THE GOLDFINCH is a disaster.

THE GOLDFINCH: #TIFF19 has its first disaster. An adaptation bled dry of drama, with truly whhhhaaaaat-is-this performances from Ansel Elgort, Finn Wolfhard, and Nicole Kidman. The most exciting scene happens off-screen, but from the sound of it, it was pretty neat.

THE GOLDFINCH: Gorgeous and airless. The actors all do what they can, and some — Finn Wolfhard, Sarah Paulson — manage to shake the film out of its chilly self-consciousness. Nothing, though, can rescue the absurdly rushed and busy final act. #TIFF19

Ugh. THE GOLDFINCH was so bland and boring, I just. I really can’t say much other than nothing happens for almost 2 hrs, then everything happens at once but it’s so disconnected that it evokes no feeling. #TIFF19

THE GOLDFINCH: A movie as inert as the oil painting it is titled for. John Crowley’s listless direction and a cast apparently afflicted with narcolepsy make this the first big bomb of #TIFF19 Some books were never meant to be movies. pic.twitter.com/3ZCfDtyuky

12 thoughts on “That Seemed To Go Well”