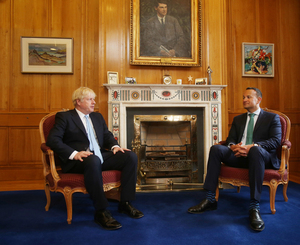 Boris Johnson came to call on us,

He wanted to tell all of us,

Brexit won’t put a wall ‘round us, it’s frictionless.

Not so, says Leo back to him.

We’re waitin’ for some facts from ‘em,

So it’s the Backstop we’ll be backing then, Athena.

If you listen closely you can just hear the ghost of George Hodnett groan at the thought of his comic folk song “Monto” having my pitiful new verse inflicted upon it.

Nonetheless, commemorating the visit of the reigning contender for the twin titles of worst and last ever UK Prime Minister to our fair city, in verse does somehow seem appropriate.

To be fair, Prime Minister Johnson did not make a show of himself… well, not by his recent standards. His remarks were coherent and almost relevant. They bordered on emollient:

“I have one message that I want to land with you today, Leo, that is I want to find a deal, I want to get a deal”.

The pity is that none of what he said amounted to a plan. Instead we got the usual Johnson line about the UK never imposing checks along the border, but nothing about how this plays out in the no-deal Brexit for which so many in his party yearn.

Johnson had even less to say about the other direct and dire consequence of an October 31 no-deal Brexit, the imposition of Direct Rule in Northern Ireland on November 1. Such a unilateral move would torpedo the Good Friday Agreement.

An Taoiseach did not.

Varadkar was candid, saying: “the Irish government will oppose the reintroduction of direct rule were that to happen”, adding that it would be contrary to the Good Friday and St Andrews Agreements.

The introduction of Direct Rule in Northern Ireland has been a live issue for months, particularly since a leaked April memo that quoted UK cabinet secretary Sir Mark Sedwill, as saying:

“The current powers granted to the Northern Irish secretary would not be adequate for the pace, breadth or controversy of the decisions needed to be taken through a no-deal exit. Therefore we would have to introduce direct rule.”

Let’s be clear. A unilateral move by the British to impose Direct Rule would up-end three decades of progress. Ireland cannot countenance a British solo run. No ifs, buts or maybes.

His caveat that “ultimately, it will be the responsibility of the sovereign government, which is the UK, to manage affairs in Northern Ireland” goes the opposite direction. It risks allowing Johnson to surmise that Ireland will “wait and see” and may only respond after the fact.

We do have options, after the fact, powerful ones. As Varadkar told Johnson yesterday:

“…the story of Brexit won’t end if the UK leaves the EU on October 31st or January 31st…We all have to deal with issues like tariffs and state aid, ratified by 28 governments.”

It is a repeat of what the outgoing EU Commission President, Jean Claude Juncker told the European Parliament last April:

“…whatever happens, the UK will still be expected to address the three main separation issues.

· Citizens’ rights would still need to be upheld and protected.

· The UK would still have to honour its financial commitments made as a Member State.

· And thirdly, a solution would still need to be found on the island of Ireland that preserves peace and the internal market. The UK must fully respect the letter and spirit of the Good Friday Agreement. [My emphasis]

“No-deal” does not mean no commitments. And these three issues will not go away.”

Both statement are reminders to the UK that negotiations after a no deal Brexit will focus on the same issues, but with one important difference; they will not be run under Article 50 of the EU Treaties. That covers EU members quitting the EU.

As a third country outside the EU future talks would be conducted under Article 218. This is the 27 member-states and the European Parliament a veto over any UK deal. It’s a higher bar than Article 50.

That means a future Dáil could reflect on the damage done by the UK to, borrowing President Juncker’s phrase, the letter and spirit of the Good Friday Agreement when considering the deal.

But our approach is not limited to responding after the fact.

There is an active option available now to both governments, though Irish statecraft will have to drag or cajole the Brits to get to it. It is to resurrect the detailed partnership proposals (Plan B) announced by Bertie Ahern and Tony Blair in their joint statement of April 6th 2006.

Their response to the political challenges to devolution was to take their shared stewardship of the Good Friday Agreement seriously and declare that:

We are beginning detailed work on British-Irish partnership arrangements that will be necessary in these circumstances to ensure that the Good Friday Agreement, which is the indispensable framework for relations on and between these islands, is actively developed across its structures and functions. This work will be shaped by the commitment of both Governments to a step-change in advancing North-South co-operation and action for the benefit of all.

The timeline section (Annex D) of the St Andrews Agreement repeated the warning to all parties that there was a Plan B alternative to simple Direct Rule:

“…failure to agree at any stage, and the Governments will take forward new partnership arrangements on the basis previously announced.”

This time around it is the British government, a minority British government at that, which needs to heed this warning. As has been the case at every crisis point in Northern Ireland over the past twenty plus years, the only way forward is partnership between the two governments.

That remains the case now even though one of the parties is opting to take itself outside the wider partnership within the EU. 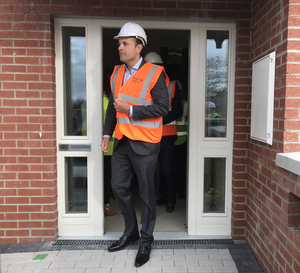 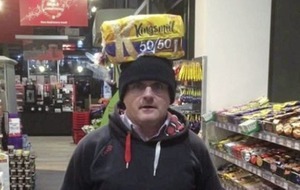 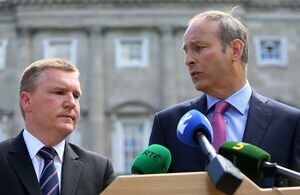 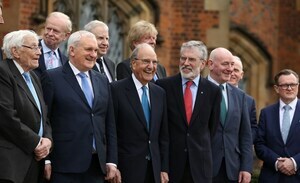